A $2.7 million community enhancement project in Shady Cove will include a number of roadway safety improvements to a repaving project on Oregon 62. The project extends north from the Rogue River Bridge to Cleveland Street in Shady Cove.

“We can’t wait for it to start,” said Shady Cove Mayor Tom Sanderson. “Since the highway is the gateway to Crater Lake, this project will provide a better image for us and increase tourism. It’s extremely important to us.”

Work is scheduled to begin after the Labor Day weekend in 2017.

Project plans are wrapping up in time for a contractor to bid in May.

“We adjusted the construction schedule with Shady Cove’s summer tourism season in mind,” said ODOT Project Information Specialist Gary Leaming. “Some utility relocation work will occur this spring and summer but the bulk of the construction work won’t begin until after Labor Day.”

In addition to a new roadway surface, the project will build:
• Curb, gutter, sidewalks, and bike lanes on the river side of Oregon 62 from the Rogue River Bridge to the north side of Chase Bank;
• Curb, gutter, sidewalks, and bike lanes on the west side of Oregon 62 from Chaparral Drive north to Cleveland Street;
• Marked crosswalks and rapid flashing beacons north of Rogue River Drive and between Chaparral Drive and Williams Lane;
• Continuous, two-way, left-turn lane on Oregon 62 from the bridge to Williams Lane; and
• A right-turn lane with sidewalks from Rogue River Drive onto southbound Oregon 62.

There are no plans on the horizon to improve the highway from the Rogue River Bridge south to Brophy Road. Jackson County is contributing project funds for the right-turn lane from Rogue River Drive.
__ 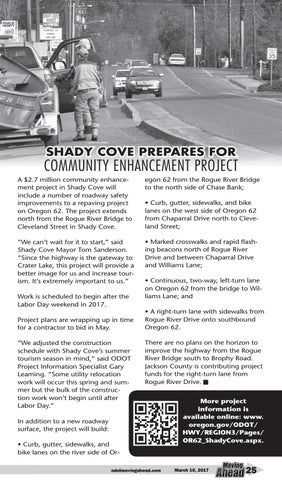