The bridge rehabilitation project, scheduled to begin after Labor Day weekend, is expected to be under active construction until early 2019. The project team will select a bid later this month and announce the selection on the project website.

“Our goal is to return Caveman Bridge to its original glory,” said ODOT Bridge Engineer Bob Grubbs. “It will be restored as something the City of Grants Pass, the Rogue Valley and the state of Oregon can be proud of for many years.”

Construction work will affect traffic nightly from 7 p.m. to 7 a.m. with a single lane of traffic open. Twelve full-night closures, from 9 p.m. until 6:30 a.m., will be scheduled as needed over the length of the two-year project. Special project provisions scheduled no-work weekends to avoid conflicts with annual celebrations and other key community events. Bridge rehabilitation details are provided in the graphic on the opposite page.

A March open house showcased the needed bridge improvements and detailed construction impacts to traffic and nearby businesses. According to ODOT Project Information Specialist Gary Leaming, the open house had a great turnout that included a special appearance by the famed Oregon Caveman Club of Grants Pass, a boisterous group of civic boosters formed in 1922. 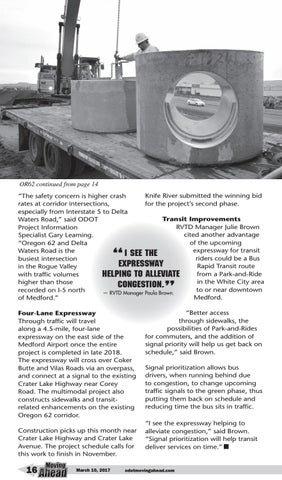