A $7.4 million safety project, stringing cable barrier down the Interstate 5 median, is underway in Jackson, Josephine and Douglas counties.

“We’re installing cable barrier in locations where there isn’t steel guardrail or concrete barrier,” said ODOT Project Manager Ted Paselk. Cable barrier is a very cost effective way to save lives. When a motorist leaves the roadway, the cable absorbs the energy and prevents the car or truck from crossing into the opposite lanes of traffic.

The project installs cable barrier in 15 locations along I-5 from Ashland north to Rice Hill. Work is expected to be completed this year.

Cable barrier maintenance
Cable barrier replaces concrete barriers and steel guardrails in locations where opposing lanes are separated by a median of less than 100 feet or are at different elevations. The cable barrier, usually placed at least 12 feet from the fog line, is designed to deflect vehicles no more than nine feet.

The cable barrier located south of Valley of the Rogue State Park is one of the I-5 locations struck most often, when southbound drivers fail to negotiate a gentle right curve and go off the highway into the median.

“More crashes on I-5 would have resulted in death or more serious injuries if not for the cable barrier,” said ODOT District Manager Jerry Marmon. 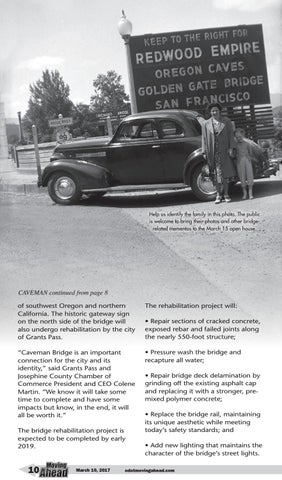