The multi-phase project will increase capacity and improve safety along the Oregon 62 corridor, a critical business connection for commercial freight, tourism and commuters from Medford to destinations east.

The project also builds a 4.5-mile, four-lane expressway that will connect near Interstate 5 Exit 30 and diverge from the Crater Lake Highway southeast of the Medford Airport. The expressway will extend north, cross over Coker Butte and Vilas Roads via an overpass, and connect at a signalized interchange with the existing highway near Corey Road.

“The schedule has been affected by the wet weather,” said ODOT Project Manager Tim Fletcher. “But Knife River has been able to push the project through to the next phase.”

New curb, gutter, sidewalk and driveways are nearly complete along the south end of the project in addition to new approaches to Skypark and Whittle Roads. Paving work on the new third eastbound lane was completed earlier this month.

Next Steps
In the heavily traveled south end of the corridor, construction of a directional interchange is expected to continue through the end of the year.

“We’ll get the interchange built in this stage and, after that, we’ll add westbound traffic to it,” said Knife River Project Manager Tyler Douglas.

Since construction in front of the south side businesses is nearly complete, the center concrete median will shift south. That will provide a buffer from westbound traffic as work progresses on the new interchange.

“The two eastbound lanes will be narrower during this stage,” said Fletcher, “especially near Lava Lanes and the two left-turn lanes for the Safeway and Lowe’s shopping area. Those two lanes will be about 100 feet shorter through the summer and fall.”

Electronic variable message signs will direct through traffic to stay right approaching the Delta Waters intersection. According to ODOT Project Information Specialist Gary Leaming, the agency plans additional outreach to encourage traffic headed for Costco and Walmart to use the Owen Drive access instead of Delta Waters Road.

The westbound lanes from Delta Waters Road will travel up and over the small directional interchange. Eastbound expressway traffic to White City will travel under it. Meanwhile, Oregon 62 traffic eastbound to the Delta Center shopping areas will continue as it does today.

Phase Two
Construction of the project’s second phase, on the north end of the corridor, bid last December. The work is just beginning between Vilas Road north toward Justice Road and farther along the expressway alignment where it will end near Crater Lake Highway and Agate and Corey Roads.

Businesses next to where the expressway crosses Vilas Road, as well as residents along Peace Lane and Justice Road, are seeing increased truck traffic. The trucks are carrying loads of dirt and rock for the new roadbed as well as for the new Vilas Road overpass. When complete, Justice Road will be cut by the expressway with cul-de-sacs on each side.

Emergency gates will be installed for emergency access to and from the expressway.

Emergency service providers advised renaming Justice Road west of the expressway. The agency is working with Jackson County to facilitate the change.

Construction has already changed the appearance of the area near the north end of the expressway, where it ends at a signalized intersection near Agate and Corey Roads.

Agate Road closed earlier this spring. Before the end of this year, Crater Lake Avenue will be realigned and extended north to East Gregory Road. Access to Oregon 62 from Crater

Lake Avenue will change to Fowler Lane with the closure of the Corey Road intersection.

“We’re closing the Corey Road intersection for safety because of its close proximity to expressway signals,” said Fletcher. “Completion of the Crater Lake Avenue realignment is scheduled for later this fall.”

The new 4.5-mile, four-lane expressway is scheduled to open to traffic in late 2018.

Clearing Crashes
ODOT and Knife River met again with Medford-area emergency service representatives to share project information and examine response scenarios to potential traffic crashes in the work zone. The shared public safety goal is to remove vehicles blocking the travel lanes as soon as possible, reducing the likelihood of a secondary crash.

“We’re all on the same page when there’s a work zone crash,” said ODOT Assistant District Manager Jeremiah Griffin. “Getting a crash cleared as soon as possible will reduce the chance of a secondary crash and keep traffic moving. That corridor is so busy that any crash will quickly affect local streets and back up traffic to I-5.” 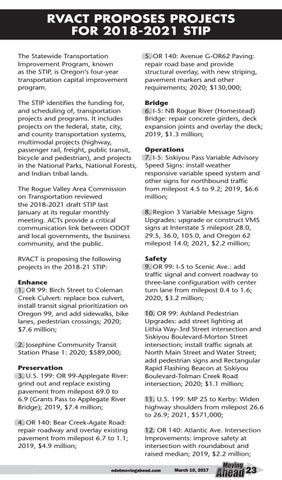