Oregon 99 Improvements from Talent to Ashland

A $5.4 million project that will enhance safety and livability along Oregon 99 from Talent south to Ashland begins this summer and will extend over the next two construction seasons.

Bids opened last week. ODOT anticipates it will name the prime contractor later this month and will announce the news on the project webpage.

This summer, Oregon 99 will be paved and restriped from the Talent city limits south to Ashland. Most of the first phase of work will convert the highway to three lanes with a center turn lane and bike lanes. At the same time, construction work in Talent will relocate utilities across Oregon 99 from Rapp Road to Creel Road.

More improvements
ODOT Project Leader Richard Randleman said the section of Oregon 99 from South Valley View to Jackson Road will remain in its current five-lane configuration because of the weave-and-merge traffic that accesses Oregon 99, Interstate 5, nearby businesses and the Bear Creek Greenway. A new bike lane will be added to this section, a benefit for local riders who use the highway to connect to the Bear Creek Greenway near South Valley View Road.

“We’re accommodating all users — vehicles, bicycles and pedestrians — and making Oregon 99 safer for residents and business customers who need to make a left turn,” said Randleman.

“While contractors clean up after their nightly operations, bicyclists may want to use Bear Creek Greenway instead and avoid any chance of running into debris along the edges of the highway,” said Randleman.

“With ODOT’s help, we’ll keep our riders and drivers informed of the project as it progresses to keep everyone safe,” said RVTD Operations Manager Tim D’Allesandro.

Next phase in 2018
The second phase of construction work in Talent will start in spring 2018. Urban improvements planned from Rapp Road to Creel Road include new curb, gutters, sidewalks, bike lanes and driveways. The city of Talent is contributing $400,000 to the project.

“This will be one of the pivotal projects for Talent and its future,” said Talent Mayor Darby Stricker. “What makes this a particularly great project is the impact it presents across the board. It’s not just safety but also livability and economic development potential for Talent.”

One of the project’s early supporters, Mayor Stricker said the urban improvements will contribute to a strong business corridor by providing better visibility for business and better access to driveways. 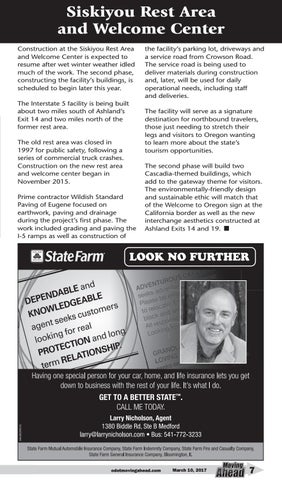