“We can’t wait for it to start,” said Shady Cove Mayor Tom Sanderson of a $2.7 million community enhancement project on Oregon 62, scheduled to begin after Labor Day weekend. “Since the highway is the gateway to Crater Lake, this project will provide a better image for us and increase tourism. It’s extremely important to us.”

The project will include a number of roadway safety improvements to the Oregon 62 repaving project, which extends north from the Rogue River Bridge to Cleveland Street in Shady Cove.

“Shady Cove’s tourism season is vital to the community, so we adjusted our construction schedule to reduce the impacts to those businesses and summer visitors,” said ODOT Project Information Specialist Gary Leaming. “Some utility relocation work needs to be completed this spring and summer but the bulk of the construction work won’t begin until after Labor Day weekend.”

Leaming noted that other project features once considered during the design phase have since been dropped from the project due to right of way costs and concerns from local businesses. The project features dropped from the project included: sidewalks from Rogue River Drive to Chaparral Drive; additional sidewalk on the river side of Oregon 62 from Chase Bank to Williams Lane; and a northbound RV pull-out across from Shady Cove Market and Phil’s Frosty.

The project bids next week. The winning bid will be announced on the project website. 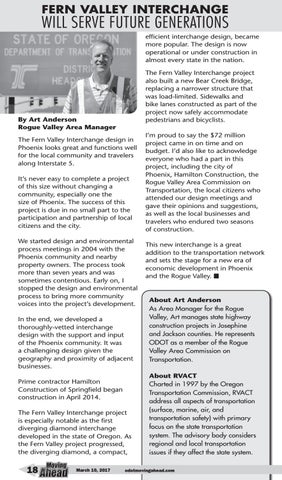