Road construction or maintenance at any time of day presents unique safety challenges. Add daytime traffic and congestion and a crash can soon back up traffic and present secondary (rear end) crashes that completely shut down the road.

While nighttime work benefits from less traffic, additional danger comes in the form of impaired drivers, whether they are under the influence of alcohol, drugs, or something else, like lack of sleep.

“The margin of safety is thin,” said ODOT Project Manager Tim Fletcher. “With only orange barrels separating our contractor and inspectors from nighttime traffic, we need to put in place several measures to help keep them safe.”

Measures include lowering work zone speed limits from 55 MPH to 45 MPH with a posted construction advisory speed of 35 MPH. ODOT will require electronic message boards and portable rumble strips that will be laid down and picked up nightly.

Another safety measure will be the Medford Police Department’s speed van. The van will mobilize in the work zone with photo radar. In 2013, the Oregon Legislature reviewed a pilot project using photo radar in work zones and made the program permanent. Advance warning signs will alert travelers when photo radar enforcement is active.

“This summer’s bridge work in Medford will be the first time an I-5 work zone employs photo radar outside the Portland metro area,” said Leaming.

The photo radar device takes two photos when it detects speeding: the first photo is of the approaching vehicle; the second is of the vehicle driving away to record the license plate. The registered owner will receive a speeding ticket in the mail.

More than 50,000 vehicles travel across the Medford viaduct daily.

It is necessary to complete the bridge deck repairs at night to keep traffic moving. One I-5 lane in each direction will close from 8 p.m. to

7 a.m. Mondays through Thursdays. The construction work will include deck inspection, repairs to problem areas, and ‘shot blasting’ on the deck to prepare it for resurfacing with a multi-layer, polymer concrete overlay.

According to Fletcher, the Barnett Road overpass, which was built before I-5 opened in 1962, is structurally deficient.

The deck is a patchwork of previous repairs that now affect the bridge’s load capacity. Local commuters attest to the poor deck condition, feeling each patched pothole.

“The contractor will chain drag the bridge deck to find the bad spots, repair them, and then prepare the deck for a new overlay,” said ODOT Region Bridge Engineer Bob Grubbs.

The project schedule is for rehabilitation on the Barnett Road overpass during daytime hours with one lane of traffic open in each direction. Travelers should expect delays and, if possible, consider alternate routes during the peak traffic hours. 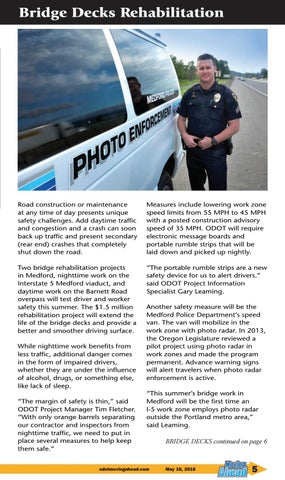