The $5.3 million Caveman Bridge rehabilitation project in Grants Pass now enters a more robust construction phase that soon will necessitate full-night closures and traffic detours. At the same time, special project provisions are in place for no-work weekends and evenings to ensure bridge work doesn’t interfere with Boatnik and other summer community events.

“We’re trying to balance the needs of the project and the community, especially for those businesses located near Caveman Bridge relying on summer tourism for their livelihood.”

Grants Pass celebrates Boatnik every Memorial Day weekend. The Grants Pass Active Club has hosted the annual multi-day celebration since 1959. Families enjoy the event throughout the community, including the downtown parade and boat races on the Rogue River.

The Hellgate Jetboat Excursions, which began its season earlier this month, is another major tourism magnet near Caveman Bridge. Over the last six decades, visitors from all over the world have taken trips up and down the wild and scenic Rogue River and through historic Hellgate Canyon with 100-foot-high cliffs made famous by the cliff-jumping scene in Butch Cassidy and the Sundance Kid and Meryl Streep in River Wild.

The pedestrian path for Hellgate customers to board the boats is located directly under the bridge. For everyone’s safety, the project schedule calls for stopping bridge work on the path between 7:30 a.m. and 9 p.m.

The city of Grants Pass, the Grants Pass and Josephine County Chamber of Commerce, and adjacent businesses collaborated with ODOT to develop the project. Information collected from that collaboration showed that any construction-related lane closures would quickly cause traffic — nearly 19,000 vehicles daily — to back up through the city.

“Caveman Bridge is an important connection for the city and its identity,” said Colene Martin, President-CEO of the Grants Pass and Josephine County Chamber of Commerce. “We know it will take some time to complete and have some impacts but in the end, it will all be worth it.”

Prime contractor HP Civil Inc. works from a platform under the bridge, which serves as the gateway to the Redwood Empire in southwest Oregon and northern California. Attached by cable, the platform provides safe and sturdy access to the heart of the 86-year-old bridge.

“This rehabilitation project is the first major upgrade to the historic structure since its construction in 1931,” said ODOT Project Manager Tim Fletcher. “So far, the night work involved removing old bridge rail and replacing it with prefabricated rail that is identical in appearance but meets current crash standards.”

The project schedule allows for twelve full-night closures. Detour signs will alert motorists to use M Street and the Debs Potts Bridge on U.S. 199 to travel across the Rogue River during these closures. During this time, business accesses located on the north end of the bridge will be open and well signed.

“No one will be surprised when it comes to the night closures on Caveman Bridge,” said Leaming. “We will have several weeks lead time based on the contractor’s schedule. Before each night closure, we will ring our bell loudly and spread word throughout the community.” 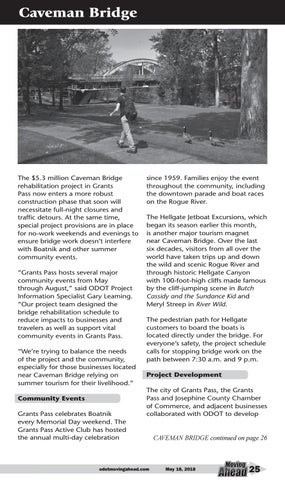