“I hear the car crashes or screeching of tires from near misses,” said Grants Pass Irrigation District Manager Don Miller. His office is near the intersection, located on property off Fruitdale Drive, where, periodically, crash vehicles and other debris land. “I’m concerned about people and the number of wrecks…it’s just a matter of time before another happens.”

ODOT recorded more than 70 crashes over the past decade at the Fruitdale Drive intersection with more than half occurring over the past three years. Most crashes occur during the afternoon commute.

“Drivers wait to cross,” said Miller. “Some have trouble with depth perception, reading speed and whether an oncoming driver is going to town or not. Some change their mind at the last minute and there’s a crash.”

This summer, ODOT plans to modify the Fruitdale Drive Intersection to eliminate the westbound crossing (shortcut) across Williams Highway.

The Fruitdale Drive intersection is nearly 60 years old. Overcapacity is one of the many reasons attributed to the high crash rate.

“Most of the crashes are caused by a failure to yield,” said ODOT District Manager Jerry Marmon. “Modifying the Fruitdale Drive intersection is a short-term solution. There’s a lot of community concern this change will add more congestion to the “South Y” interchange and our agency shares those concerns.

“There’s need for a better solution that will require more collaboration between ODOT, the city of Grants Pass and the local business and residents. Until we can begin a long-term study of the “South Y” area, the choice is clear. We need to modify this intersection to reduce its high crash rate.” 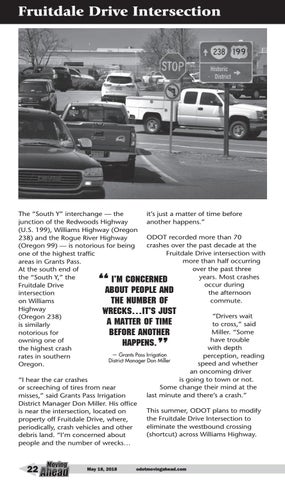