Commuters who have navigated construction work along the Oregon 62 corridor between Interstate 5 and Delta Waters Road over the past two years can look forward to relief as the first phase of the Oregon 62 Expressway project wraps up.

“The next project phase will focus primarily on the new expressway and away from traffic,” said ODOT Project Information Specialist Gary Leaming. “For commuters on Crater Lake Highway, that means fewer closures, orange signs, and barrels.”

The $120 million project is designed to increase capacity and improve safety. The Oregon 62 Expressway improves a critical business connection for commercial freight, tourism and commuters from Medford to east destinations.

Prime contractor Knife River Materials is constructing a 4.5-mile, four-lane expressway that connects near I-5 Exit 30 and diverges from the Crater Lake Highway southeast of the Rogue Valley International-Medford Airport. The new expressway, which will be named the Rogue Valley Expressway (see page 10 for details), extends north, spanning Coker Butte and Vilas roads, and connecting at a signalized intersection with Oregon 62 near Corey Road.

The corridor between Poplar/Bullock Roads and Delta Waters Roads will also feature new sidewalks and bike lanes. On the north side of the highway, part of the old Medco multi-use path will reopen for pedestrians and bikes to connect from the Delta Center. The path features a new riding surface as well as lighting.

“After two years of construction work, phase one is coming together at the south end of the project area,” said Leaming. “Knife River installed sign bridges, moved concrete barrier, and put down new pavement along the Oregon 62 corridor.”

While Knife River wraps up at the south end of the project area, construction work on the Rogue Valley Expressway will continue until December. Crews poured the concrete bridge deck for the new Vilas Road overpass last month.

“Much of the work on the Rogue Valley Expressway will be out of sight and out of mind for commuters and the summer tourism traffic using the Oregon 62 corridor,” said Leaming.

Knife River has poured more than nine lane miles of concrete road surface. This summer, it will bring back its portable concrete plant off Helo Drive to produce large quantities of concrete on site, making a quick trip to the paving machine.

“The concrete surface will perform well in our southern Oregon weather,” said ODOT Area Manager Art Anderson. “We expect to get decades of maintenance-free use.” 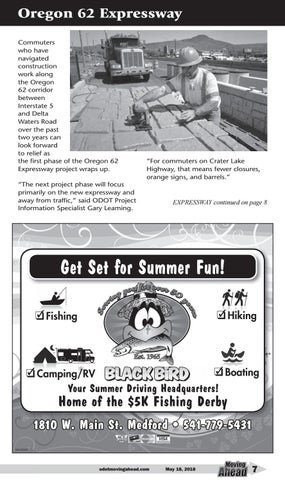