A $5.4 million highway improvement project designed to enhance safety and livability along Oregon 99 from Talent south to Ashland is already underway with work scheduled throughout summer.

For construction weary businesses along Oregon 99 and the commuters who navigated last year’s utility relocation work, this summer’s construction work should be much less stressful.

“There will still be lane closures but ODOT inspectors will be on site daily to monitor traffic control and road conditions and keep business access signed and open,” said Leaming.

The project schedule plans to finish construction work on the east side of Oregon 99 between Rapp and Creel Roads before switching to the west side. Then, the contractor will repave and restripe Oregon 99 from the Talent city limits south to Ashland.

The city of Talent contributed $400,000 to the project. Talent officials see the project as means to contribute to a stronger business corridor by providing better visibility and better, safer access for businesses and their customers.

“This improvement has been on Talent’s wish list for some time,” said ODOT Area Manager Art Anderson. “The enhancement project will provide a safer roadway for residents and business customers as well as those who are driving, biking or walking the corridor.”

RVTD’s Ashland Route 10 bus stops along Oregon 99 will remain open and, generally, unaffected during paving, a combination of daytime and nighttime work, later this summer.

“With ODOT’s help, we’ll keep our riders and drivers informed of the project as it progresses to keep everyone safe,” said RVTD Operations Manager Tim D’Allesandro.

South of Talent, the Oregon 99 section from South Valley View to Jackson Road will remain in its current five-lane configuration because of the weave-and-merge traffic that accesses Interstate 5, nearby businesses and the Bear Creek Greenway.

The project will build bike lanes south of South Valley View Road where, on average, nearly 17,000 vehicles use the highway daily. This will benefit bicyclists who use Oregon 99 to connect to Bear Creek Greenway. 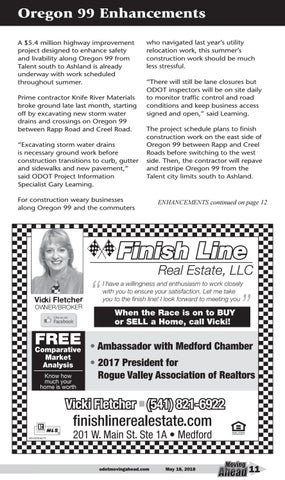