As times change names change and, sometimes, they change more than once. When groundbreaking for the first phase of the $120 million Oregon 62 Expressway began in May 2016, the project’s former name, “Oregon 62: I-5 to Dutton Road” was retired.

“During the development process, project names are often focused on where the work begins and ends,” said ODOT Project Information Specialist Gary Leaming. “Sometimes, as a project nears the construction stage and evolves, we need a new name that is more public-friendly.”

The 2009 Oregon Legislature approved the Jobs and Transportation Act, which provided $100 million for the project’s first two phases, including construction of a 4.5-mile, four-lane expressway to alleviate safety and congestion issues along the existing Oregon 62 corridor.

When the project wraps up in late 2018, the new road will be officially signed as the Rogue Valley Expressway. ODOT Assistant District Manager Jeremiah Griffin said a new name is necessary to eliminate possible confusion with Crater Lake Highway and Crater Lake Avenue, which are both located in close proximity to the new expressway.

The Rogue Valley Expressway connects near Interstate 5 Exit 30 and diverges from Oregon 62 southeast of the Rogue Valley International-Medford Airport. The new road extends further north, spanning Coker Butte and Vilas roads, before reconnecting to Oregon 62 at a signalized intersection near Corey Road.

ODOT worked closely with emergency service providers during project development to address their operational needs. A gated entry at Justice Road will provide access to and from the Rogue Valley Expressway during emergencies. 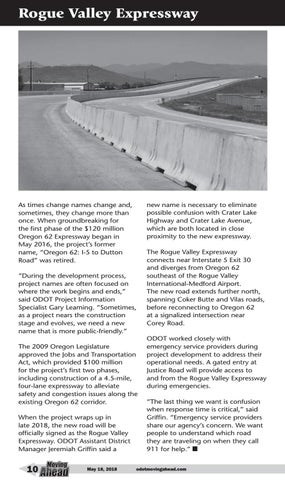