Prime contractor HGC, Inc. made the most of an unusually dry and mild Oregon winter to forge ahead on the $2.7 million enhancement project along Oregon 62 in Shady Cove. All of the major work including final paving is now complete, just in time for Memorial Day Weekend, the official start of the summer tourism season.

The contractor’s challenge was the Memorial Day Weekend deadline, considering the many weather-dependent elements of the enhancement project on Oregon 62.

Oregon 62 is the main road and there are no parallel routes through the community. In the work zone, pedestrian paths are clearly marked. Now, new crosswalks provide safer passage with pedestrian-activated lights to warn drivers before people cross the highway.

The project’s community enhancements include:

“Our agency greatly appreciates the Shady Cove community’s patience with this project,” said ODOT Area Manager Art Anderson. “We know it hasn’t been fun for residents and travelers to navigate our work zone. However, we’re excited to put the final touches on enhancements this community urged us to build. And we’re confident residents, businesses and summer visitors will enjoy the finished project.” 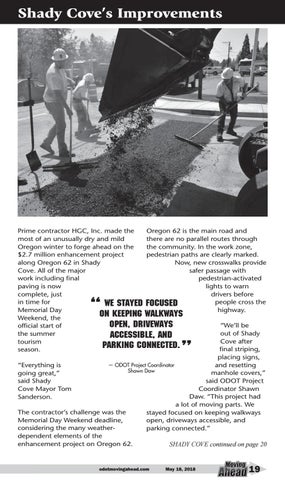