For most people, 16 years of responding to emergencies — 1 a.m. phone calls for winter snowstorms, summer wildfires, or the every-day-of-the-year vehicle crash that can bring Interstate 5 to a screeching halt — would be just about enough. But not for Jeremiah Griffin.

Griffin serves as ODOT’s Assistant District Manager for the Rogue Valley, a role he took on in 2010 after working six years as a dispatcher for ODOT and Jackson County 911. His current responsibilities include managing a team of nine dispatchers, who are co-located with the Oregon State Police in Central Point.

“Most people don’t know his job requires an absolute commitment to be available,” said ODOT Project Information Specialist Gary Leaming. “Every so often, that means working around the clock. He’ll work past midnight and then come back early the next morning.”

Griffin, 41, grew up in Jacksonville and graduated from South Medford. Graduation night 1995 was particularly auspicious. He met Becky, a North Medford student, at their schools’ combined graduation night party hosted by the YMCA. They married in 1999 and started a family in Medford. When Griffin is not spending time with his family or responding to incidents, he also helps coach the North Medford Track and Field team, another calling which he has served 20 seasons and counting.

“My phone is almost never off,” said Griffin, acknowledging the difficulty of balancing his Incident Response duties with family and personal life. “Last month, I was home making dinner when my phone rang. CalTrans wanted to close I-5 in Ashland because of wildfire. For the next three hours, I was on the phone, coordinating with fire command, the California Highway Patrol, and our other emergency service partners.”

He’s a member of the Rogue Valley Traffic Incident Management team, an assembly of public and private entities including OSP, the Jackson County Sheriff’s Office, the City of Medford, Mercy Flights Incorporated and regional tow companies.

“I’m truly representative of a larger team that includes our agency and our local partners, working together for the public,” said Griffin.

For the last two years, Griffin has led the regional traffic control team for the County Crossings Music Festival.

“Everyone knows Jeremiah, and he’s considered the go-to guy for regional traffic control issues in southern Oregon,” said Jackson County Roads and Parks Director John Vial. “His understanding of traffic control and his collaborative leadership style makes him a perfect fit, especially when things get ugly. He is a natural leader people enjoy working with.”

This summer, most big events involved firefighting efforts as wildfires closed I-5 and other highways throughout Oregon and California.

“A lot of folks think winter is our busiest time, but we are heavily involved assisting emergency services during the summer travel season and wildfires,” said Griffin.

“This past summer was as busy as I’ve ever seen it,” said Griffin. “We’re not firefighting, but we’re providing water and supporting them with our equipment. Our Grants Pass maintenance crew has spent a good amount of the past two months assisting firefighting operations.”

Griffin emphasized the importance of weekly, monthly and yearly work plans for the maintenance teams, especially as ODOT becomes more and more reactive during summertime, whether the cause is wildfires or traffic crashes.

According to The Old Farmer’s Almanac, winter solstice arrives December 21, though Griffin’s preparations for winter operations are already underway. ODOT maintenance crews are already gearing up for the challenges they will face when the first winter storm arrives in the Rogue Valley.

The agency’s goal of maintaining safe, open highways remains the same regardless of the season. And, with every technological and operational improvement, so grows the public’s expectation for faster and more efficient incident response.

“We’re aware of a higher level of public expectation driven by smartphones, social media, and TripCheck,” said Griffin. “We’ve also developed a better understanding of a 20-minute lane closure and what it does, not only to our regular maintenance operations, but also how it amplifies the risk of a secondary crash, which places emergency responders in greater danger.”

“Our resources are stretched over 15 miles versus 11 miles on Siskiyou Pass,” said Griffin. “That means plow cycle times are longer. And it means travelers often encounter different weather conditions on each pass.”

ODOT continues to modify one-ton trucks with plows to manage snow on secondary highways in the Rogue Valley, which allows maintenance crews to take larger equipment onto the I-5 mountain passes north of Grants Pass.

“We’re being more creative,” said ODOT District Manager Jerry Marmon. “We’re managing our equipment better and continuing to lean on our pusher trucks as our work horses on the mountain passes.”

Pusher trucks are short, stalky tractors. They are equipped with a rubber pusher bar, extending beyond the front bumper, and a counterweight mounted atop the back axle, which enhances traction on icy sections and stability on steeper grades. The pusher truck can prod stalled commercial rigs weighing up to 80,000 pounds until they regain traction on their own.

“Most of the time, we’re just giving a rig a nudge to help them get moving so they aren’t blocking traffic,” said Griffin. “Pusher trucks save money and time, often turning a two-hour towing situation into a two-minute pusher truck solution.” 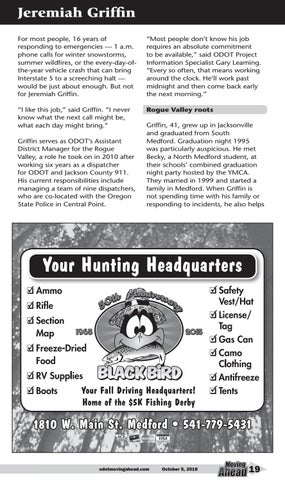