“This past summer was our busiest period of construction on the Rogue Valley Expressway, from about Vilas Road north,” said ODOT Project Information Specialist Gary Leaming. “The work went unnoticed by most travelers. Night owls in the area saw lots of construction activity, including grading work for the new concrete roadway, which needed the cooler night temperatures.”

Prime contractor Knife River Materials of Central Point brought back its portable concrete plant and located it off Helo Drive to produce the huge amount of concrete needed to feed its paving machines. They paved more than 18 lane miles of concrete road.

“The concrete surface will perform well in our southern Oregon weather,” said ODOT Area Manager Art Anderson. “We expect to get decades of maintenance-free use.”

Until the end of the year, construction work north of Vilas Road will focus on concrete paving of the center median and shoulder as well as adding barrier, guard rail and striping. Before the full opening of the Rogue Valley Expressway, the contractor will update roadway signs on the project’s south end and stripe the new transition from the existing Oregon 62 (Crater Lake Highway) located across from Dazey’s Hubbard’s hardware store.

The four-lane expressway begins east of Interstate 5 Exit 30 and diverges from the Crater Lake Highway southeast of the Rogue Valley International-Medford Airport. The Rogue Expressway spans Coker Butte and Vilas roads, and connects at a signalized intersection with Oregon 62 near Corey Road.

The corridor between Poplar/Bullock Roads and Delta Waters Roads features new sidewalks and bike lanes. On the north side of the highway, part of the old Medco multi-use path has reopened for pedestrians and bikes to connect from the Delta Center. The path features a new riding surface as well as lighting.

“You’ll notice the lighting at the south end on the roadway and multi-use path looks pretty low. That’s by design since it is so close to the flight path for the Rogue Valley-Medford airport,” said Anderson. ODOT worked closely with airport officials and the Federal Aviation Administration to make sure the project did not interfere with airport safety and operations.

As times change, names change, and sometimes they change more than once. When groundbreaking for the first phase of the Oregon 62 Expressway began in May 2016, the project’s former name, “Oregon 62: I-5 to Dutton Road,” was retired.

“During the development process, project names are often focused on where the work begins and ends,” said Leaming. “Sometimes, as a project nears the construction stage and evolves, we need a new name that is more public-friendly.”

The 2009 Oregon Legislature approved the Jobs and Transportation Act, which provided $100 million for the project’s first two phases, including construction of a 4.5-mile, four-lane expressway to alleviate safety and congestion issues along the existing Oregon 62 corridor.

When the project wraps up in early 2019, the new road becomes the Rogue Valley Expressway. ODOT Assistant District Manager Jeremiah Griffin said a new name is necessary to eliminate possible confusion with Crater Lake Highway and Crater Lake Avenue, which are both located in close proximity to the new expressway.

ODOT worked closely with emergency service providers during project development to address their operational needs. A gated entry at Justice Road will provide access to and from the Rogue Valley Expressway during emergencies. 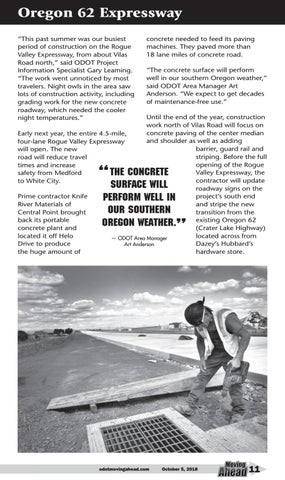