Shady Cove leaders say the Oregon 62 improvement project reset the vision for the city and gave a new boost to business and tourism.

“They feel safer,” said Mayor Tom Sanderson of his constituents three months after the project ended. “It helped reduce speeds through town. It’s better having crosswalks with lights.

Sanderson reflected on the construction, its challenges to Shady Cove and how prime contractor HGC Inc. of White City and flaggers quickly adapted the construction during the off season to turn complaints into compliments.

“It started out pretty tough,” said Sanderson. “The market was losing business because customers couldn’t get in. What’s great is you (ODOT) made adjustments…it’s really nice to get the compliments, and it’s making a difference in Shady Cove.”

Prime contractor HGC, Inc. made the most of an unusually dry and mild Oregon winter to complete the $2.7 million enhancement project along Oregon 62. ODOT designed the project schedule to avoid the summer because tourism is vital to Shady Cove’s economy. Construction work began after Labor Day and wrapped up ahead of schedule before Memorial Day Weekend.

Oregon 62 is the main road through Shady Cove, and there are no parallel routes through the community.

Pardee said she recently showed property to a prospective new business from out of state and they were impressed with the new look.

“I said you have to understand, we just got our new sidewalks,” said Pardee. “And they looked at me and said ‘Are you serious? You just now got sidewalks in the city of Shady Cove?’ so I was happy to share that.”

Pardee said businesses were initially concerned about the amount of parking they might lose. In the end, she said it had little effect.

Mayor Sanderson added that the new improvements will improve the tourism economy and help in the city’s goal of changing the community into a destination and not just a place to pass through on the way to Crater Lake.

“The biggest thing I’m hearing from businesses is they think it’s good for business,” said Sanderson.

“We’re excited to have this project complete, one the community urged us to build,” said ODOT Area Manager Art Anderson. “The vision shared years ago will help the community grow and make it more appealing and livable for generations to come.”

The project’s community enhancements include: 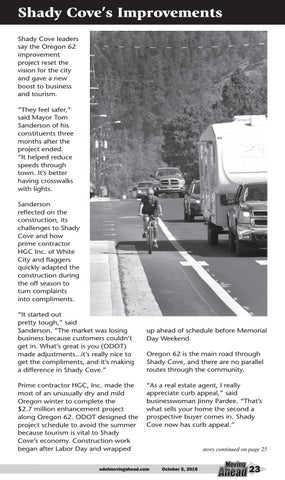