The facelift of Caveman Bridge – both structural and cosmetic – is nearly complete, and community members will be planning to celebrate the new, refurbished look on the 87-year-old Rogue River crossing later this spring.

The once gray, dingy looking arched bridge is light, bright and graceful looking once again.

“The bridge looks great!” said Grants Pass City Council President Valerie Lovelace. “The completion of the project – along with the hoped-for refurbishing of the historic Redwood Empire sign – will make for a community celebration later this spring.”

In 1931, that original celebration included a Memorial Day weekend picnic at nearby Riverside Park, complete with the noted Cavemen civic group. The Cavemen also plan to be in attendance next year, according to James Lowe, Chief Big Horn of the Cavemen, an off-shoot of the Grants Pass Active Club.

Recently, most of the work has been below the bridge deck, with workers installing the skim coat and sealant. Once complete, the work platform beneath the bridge will be dismantled.

“The intensive, time-consuming work is complete on the bridge,” said ODOT Project Coordinator Todd Snyder. ‘”Our contractor has done excellent work coming into the end of the year, and the entire project should wrap by the contract end date of next February.

Contractor HP Civil only used two nights out of 12 allowed full night closures of the bridge to do the work. Those two full night closures were needed to pour the new bridge deck surface. Much of the other work that affected traffic was done at night with a single lane open to allow necessary construction while keeping the bridge open to traffic.

“We thank the community and the nearby citizens for their patience during this project,” said ODOT Project Manager Tim Fletcher. 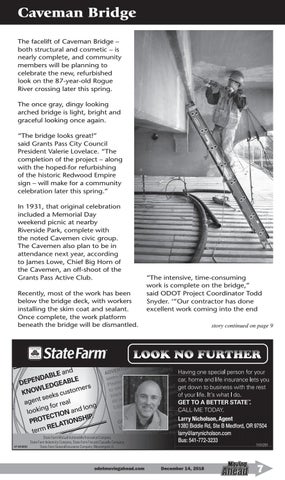