Anyone who works on Barnett Road in south Medford knows there’s a lot of traffic that pours onto Barnett Road from south Medford interchange. Traffic counts at the interchange agree. Nearly every weekday morning between 7:45-8 a.m., traffic on southbound I-5 Exit 27 backs onto the freeway, creating a hazard for all road users and results in traffic delays. This congestion affects Highland Drive and Barnett Road, causing delays for health care providers and patients, school staff and families, and other industry employees.

With thousands of people navigating these congested local roadways during such a short time frame, small changes in how or when people travel can improve conditions for everyone. That is why the Oregon Department of Transportation and Rogue Valley Transportation District are working together on a campaign called Reboot Your Commute. This program encourages employees in the Barnett Road area to commute at non-peak commute times and try options like carpooling, riding the bus, and/or biking to work.

The campaign has three goals:

To kick off the effort, RVTD and ODOT reached out to large and medium-sized employers in the Barnett Road area to identify which organizations have the most employees who commute during 7:45-8:00 a.m. peak traffic. Four major employers were identified, and each agreed to partner on the campaign: Rogue Regional Medical Center, Rogue Valley Manor, the Medical Eye Center and St. Mary’s School. The project team is working closely with human resources and communications departments at each organization to inform employees of the traffic issue and options available to avoid it.

“REBOOT YOUR COMMUTE IS WORKING TO CONNECT PEOPLE TO TRAVEL OPTIONS”

While the project team has partnered with four organizations, any employee in the Barnett Road area can go online via RebootYourCommute.org to receive information and support. By signing up, participants receive six free bus rides and opportunities to win prizes (thanks to campaign sponsors Fred Meyer, Extreme Juice, and the Human Bean).

Through Reboot Your Commute, RVTD and ODOT are working to connect people to travel options, which will improve traffic conditions in the south Medford area. This will benefit our regional transportation system, our local economy, environment and the community. 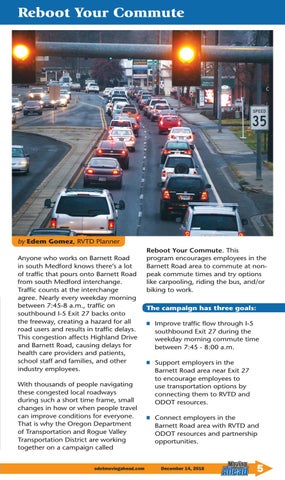