Traffic will shift onto the new Rogue Valley Expressway later this winter.

When those first vehicles transition onto the concrete roadway, it will be after nearly three years of construction and 20 years of planning on the 4.5 mile long expressway, designed to increase safety and reduce congestion on the busy corridor between Medford and points north. The $120 million project was funded in part by the 2009 Oregon Legislature’s Jobs and Transportation Act.

“Motorists driving by either end of the expressway – either on the north or south end – have seen the new roadway,” said ODOT Project Coordinator Chris Penka. “It’s been ongoing, but it’s been out of view.”

Over the summer, the roadway surface was poured at night to avoid hot temperatures and allow for a better concrete cure. Since then, the shoulders, center barrier and guardrail have been placed. Striping and signs at the transition points will soon be installed before drivers can jump onto the expressway. Once it opens, it is projected to save about seven minutes in travel time between Medford and Eagle Point.

The project increases capacity and improves safety, while also improving a critical business connection for commercial freight, tourism and commuters from Medford to destinations east.

The four-lane expressway begins east of Interstate 5 Exit 30 and diverges from Crater Lake Highway southeast of the Rogue Valley International-Medford Airport. The Rogue Expressway spans Coker Butte and Vilas Roads, and connects at a signalized intersection with Oregon 62 near Corey Road, located south of White City.

“Follow the signs.” That’s the advice a sage traffic engineer once gave when asked how to drive a new section of roadway. Just prior to opening, new directional signs will placed and striping will be painted at the transition points to the expressway.

Roadways are designed so they’re intuitive to drivers. For the eastbound driver on Oregon 62 from I-5, the far left lane that now ends prior to the expressway will be open as an exclusive lane onto the new facility. The middle lane will be an optional lane – to either enter the expressway or continue on toward Delta Waters Road and corridor businesses.

“Once you get on the expressway, you’ll be on it all the way to the end,” said Project Manager Tim Fletcher.

Coming from Eagle Point or Oregon 140, westbound Oregon 62 traffic bound for Medford will see the turn-off onto the expressway just south of White City. At that point drivers can choose to either enter the expressway or to continue on the existing business corridor.

Another option for those traveling south on Agate Road will be to take it past East Gregory Road where it will transition onto the expressway.

The corridor between Poplar/Bullock Roads and Delta Waters Roads features new sidewalks and bike lanes. On the north side of the highway, part of the old Medco multi-use path has reopened for pedestrians and bikes to connect from the Delta Center, home to Starbucks and other retailers. The path features a new riding surface as well as lighting.

That path will be critical for rider and pedestrian safety on the north side of the highway between Delta Waters Road and Bullock Road. The westbound path begins where the bike lanes ends near Discount Tire. It makes a few curves before it enters a tunnel under the westbound expressway lane before continuing to the west.

“Bicyclists who are currently use to riding up and over the directional interchange will soon find themselves in the middle of high speed traffic if they don’t follow the signs,” said ODOT Active Transportation Coordinator Jenna Marmon.

As times change, names change and, sometimes, they change more than once. When groundbreaking for the first phase of the $120 million Oregon 62 Expressway began in May 2016, the project’s former name, “Oregon 62: I-5 to Dutton Road,” was retired.

“During the development process, project names are often focused on where the work begins and ends,” said ODOT Project Information Specialist Gary Leaming. “Sometimes, as a project nears the construction stage and evolves, we need a new name that is more public-friendly.”

When the project wraps up in early 2019, the new road becomes the Rogue Valley Expressway. ODOT Assistant District Manager Jeremiah Griffin said a new name is necessary to eliminate possible confusion with Crater Lake Highway and Crater Lake Avenue, which are both located in close proximity.

ODOT is working with emergency service providers during project development to address their operational needs. Gated entry points at Vilas and Justice Roads will provide access to and from the Rogue Valley Expressway during emergencies.

Check out this early look at how to drive the Rogue Valley Expressway:
https://youtu.be/TaKI7zmLbAg 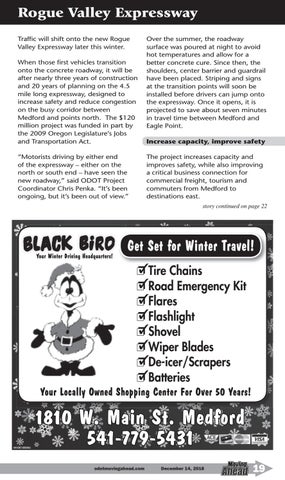