SALT AS ANOTHER TOOL

Expanded use of rock salt on Interstate 5 north from Ashland follows a successful five-year pilot project on Siskiyou Summit and on 120 miles of U.S. 95 in far southeastern Oregon between Nevada and Idaho.

Siskiyou Pass was chosen because it’s the highest point on the I-5 corridor between Canada and Mexico. During winter, chain restrictions, traffic delays and temporary road closures regularly occur. Due to the elevation and length of the Siskiyou Pass, road and weather conditions can change rapidly.

“Because California was using salt and we weren’t, traffic would come to a standstill for miles at the border because we had pack on the highway and a chain requirement. It caused delays, headaches for travelers and a safety problem for everyone,” said ODOT District Manager Jerry Marmon. “With the use of salt, when we need to, our level of service is consistent with California and our other neighbors.”

Salt reduces the freezing point of water, leading to melting and preventing icy build-up. Last winter, ODOT expanded salt application on Interstate 5 through Josephine County and Douglas counties to Canyonville. The agency constructed a rock salt storage shed in Hugo for the purpose. ODOT continues its partnership with Caltrans to use its salt shed located across the border in Hilt.

The expanded use of salt in eastern Oregon includes Interstate 84 between Idaho and Boardman, Interstate 82 near Hermiston, U.S. 395 and 730, and Oregon 207, 331 and 11. During severe winter storms, salt may be applied to other state highways with approval from the state maintenace and operations manager.

ODOT previously avoided rock salt due to its corrosive effect on asphalt, bridges and vehicles, as well as concerns about runoff into soil and streams. The five-year pilot assessed environmental impacts to nearby stream and soils in coordination with Oregon Department of Environmental Quality, Fish and Wildlife and other agencies. These studies are on-going.

“Compared with states in the Midwest, Washington, California and now Oregon use a fraction of the salt applied in colder states,” said Marmon. “We have learned best practices from Caltrans and we will continue to monitor salt use closely.” 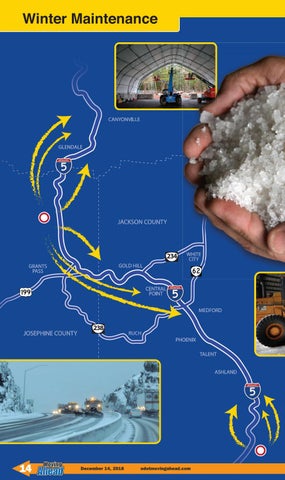