The Rogue Valley Expressway opened to traffic May 1, saving motorists about five minutes in travel time through the corridor between Medford and White City as compared to the existing highway.

The $120 million project, funded mostly through the 2009 Oregon Jobs and Transportation Act, is designed to improve safety and reduce congestion through the busy 4.5 mile corridor between Interstate 5 Exit 30 and the White City area.

The old adage of ‘time is money’ is true even on the expressway.

For example, savings of about five minutes each way for freight operators, spread out over a year, adds up to more than $300,000 in savings, said Troy Hutchens of FV Martin Trucking.

Hutchens said his 85 truckloads a day that are currently using Table Rock Road to travel between the Boise Cascade mills in White City and north Medford will use the expressway exclusively. The savings will be nearly a thousand dollars a day.

For the 30 percent of traffic that is just trying to get through the corridor, that will be a substantial savings in time, fuel and emissions.

The expressway idea dates to the late 1990s when conceptual designs began for refurbishing north Medford Interchange, Exit 30. In 2004, project teams first met to begin work narrowing roadway designs that would be evaluated in an Environmental Impact Statement. No construction funding was identified for the project until 2009 with the passage of the Oregon Jobs and Transportation Act.

Construction began on what became known as the JTA portion in May 2016, with major construction finishing earlier this year.

Design, right of way or construction dollars on future expressway phases are not identified.

“This is the biggest project in Jackson County since the interstate was constructed,” said ODOT Area Manager Art Anderson. “It took a lot of time and effort by local leaders, including our legislators, to get this project off the ground and bring the much needed improvements to the Rogue Valley.” 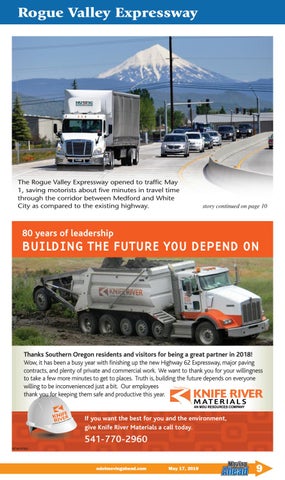