A safety rail upgrade on two Rogue Valley bridges is nearly complete. Contractor Conway Construction Company spent much of the late winter and early spring upgrading the bridge rail and deck on Oregon 140 over Little Butte Creek Bridge at Brownsboro.

The second bridge rail upgrade is scheduled for early next month on the 1954-era Jackson Creek culvert on Oregon 238/Hanley Road between Rossanley and West Main Streets. Due to the narrow roadway, a five-day detour will be in effect for the Hanley Road bridge rail replacement. Local traffic will remain open for Hanley Farms and the OSU Extension Service.

The northbound lanes of the I-5 Medford Viaduct will be cleaned, repaired and given a new epoxy coating this summer, similar to what was done on the southbound lanes last summer.

Time ran out on contractor Carter and Company last year after they completed repairs of the viaduct’s southbound lanes and the Barnett Road I-5 overpass.

Drivers can expect single lane traffic and lower speeds during the nighttime hours.

An Oregon 62 chip seal project, canceled by wildfire safety concerns last summer, is back on the calendar.  June 15 is the scheduled start of the chip seal between Trail and Casey State Park.

Chip seals are performed, at a relatively low cost, on asphalt pavement to extend the life of the road surface.  As the name implies, rock chips are sealed into the roadway surface.  It begins with a swept lane of travel which is coated with oil. It is then immediately covered with rock chips.  Rubber-tired rollers compact the rock into the oil before traffic is released to drive on it.  Traffic at low speed continues to compact the rock into the new road surface. Later, excess rock is swept from the road and a sealant is applied before the new road surface is striped.

The two-week project will be done by Jackson County Roads with ODOT. 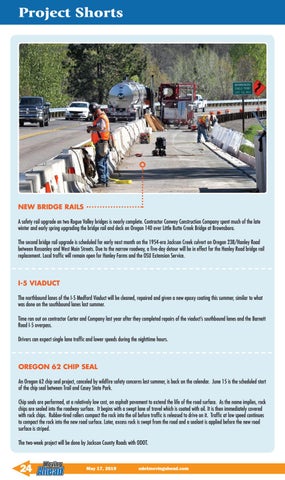