Several 6th and 7th Street intersections in Grants Pass will be upgraded for pedestrian safety next year.

The locations have been the scene of at least one crash involving a pedestrian and vehicle. The $2.2 million project is funded by the federal All Roads Transportation Safety program, which specifically targets problem intersections.

“Without these funds, we couldn’t do these upgrades to the Grants Pass system,” said Project Leader Dan Roberts. “These particular intersections, part of Oregon 99, have been identified with a crash history and are in need of repair. At the same time, we’re taking care of the ADA requirements.”

The main work will include ramp upgrades to meet the Americans with Disabilities Act, enhanced pedestrian signing and additional crosswalk markings. Three intersections will receive ”bulb outs,” where the sidewalk will extend out for increased visibility for pedestrians and for vehicles.

“The “bulb outs” at 6th and Steiger and 6th and B Streets are needed because 6th has different widths at those locations. That makes it tough for pedestrians to see and be seen,” said Roberts.  A “bulb out”’ is planned for only the south side of 6th and NW Midland.

The intersections of 7th and School and Steiger will also be improved.

Further north, the project will improve the 6th and Morgan intersection. It’s been the site of numerous crashes between Exit 58 southbound off-ramp and Scoville Road traffic.

“The off-set signals are an unusual design that catches those out of the area off guard,” said Roberts. “We’re going to improve that entire intersection.”

The 6th and Morgan portion will include new signals, ADA ramps, striping and signs along with a center barrier with glare shields between the off-ramp and Scoville Road. 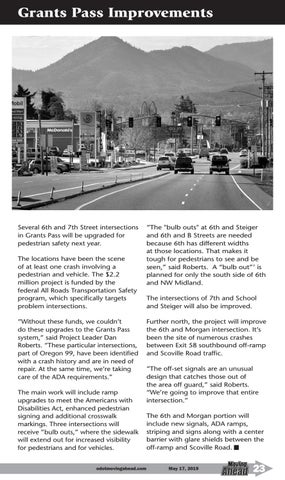