ODOT Maintenance Manager Everett Carroll has witnessed the good and bad on Interstate 5, south of Ashland.

The snow-covered interstate between the California border and Ashland keeps his crews busy in the winter.

In the summer, the bare surface reveals the roadway defects of exposed steel reinforcing bars on the six-inch concrete roadbed.  Rutting from decades of chains and studs have exposed the rebar, crumbled the concrete and created holes of varying sizes in the roadway surface. Carroll is concerned about the aging roadway.

“We don’t want to lose the whole thing,” said Carroll.

That’s about to change. Work gets underway this year – the first of three summers – on Interstate 5 between the California border and Ashland Exit 11. The work includes “diamond grinding” or leveling the existing rutted concrete surface and rehabilitating damaged concrete pavement. In some locations that means repairing or replacing the panels and a complete deck replacement on the twin bridges over Old Siskiyou Highway at Exit 6.  Guardrail upgrades are also part of the project.

“The concrete installed in the late 1980s has stood the test, but needed work is too complex for our crews– a larger project is needed,” said Carroll.  The original I-5 road surface was asphalt when the Siskiyou Summit section opened in 1966.

“This repair on the Siskiyous has been high on our list,” said ODOT Maintenance Manager Jerry Marmon. “To do the scale and scope of this project will mean a better and safer interstate.”

To repair the concrete in sections, there will be single lane closures and crossovers to isolate the construction workers and equipment from the traffic. Drivers should expect slow moving traffic and possible back-ups, especially during holiday weekends and on the climb up to Siskiyou Summit.

Because the location is in a snow zone—with Siskiyou Summit at 4,310 feet—construction timelines are limited to the late spring through the fall.

While staging will be challenging with the roadway repairs, it will become even more so in the final two years of the project with the full deck replacement of the twin bridges over Old Siskiyou Highway at Exit 6.

Like previous deck projects, traffic will be shifted onto one bridge while the other is being rehabilitated. On the bridge being worked on, the entire bridge deck surface will be replaced, except for the bridge beams that support the deck. The second year, the other bridge will be under construction.

“Project staging and keeping everyone connected will be challenge,” said Project Manager Chris Hunter. “Interstate traffic will need to be slowed, especially those trucks coming down the grade at the crossover. At the same time, a single lane of traffic for trucks going up the grade will mean some back-ups.”

Depending on the stage, Exit 6 ramps will be closed to facilitate the construction. In addition, the crossing under the bridges will be closed for a short time. That will result in out-of-direction travel for residents living on both sides of Interstate 5. Residents east of the interstate may have to use Old Siskiyou Highway down to Oregon 66 for a time.  For those on the west side of the interstate, it may include a trip to Hilt, California and back north toward Ashland.

“We realize this will mean delays and out-of-direction travel for a time,” said Hunter. “For the first major project of its type in 33 years, we’re asking for understanding as we do the needed work.” 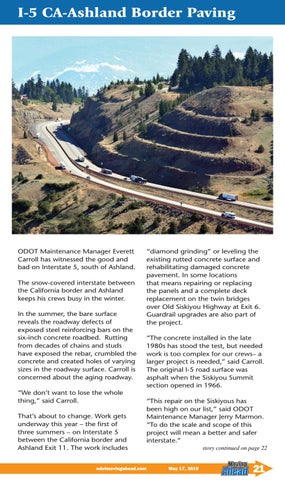