A planned upgrade to an important Jackson County road will also see the construction of the first highway-style roundabout in southern Oregon.

Next year, Jackson County will extend Foothill Road north, across Corey Road, and align it with Atlantic Avenue on the north side of Oregon 140.  The tie-in to Lake of the Woods Highway, east of White City, will be a roundabout. Its island area is 180 feet in diameter—or half the length of a football field.

“This is a project ODOT and Jackson County are doing together,” said Jackson County Roads and Parks Director John Vial. “We’re punching Foothill Road through and ODOT is connecting to the highway with a roundabout.”

So why a roundabout and not a traffic signal?

“We get a lot of comments about ‘just putting in a signal,’” said ODOT Traffic Standards Engineer Kevin Haas.

“But when we make data driven safety decisions and look at the historical data, on average, about half the crashes at signalized intersections involve injuries and fatalities.

“And the reason we propose roundabouts is they nearly eliminate all fatal and serious injury crashes.”

In designing a roundabout, engineers install visual clues for drivers so they recognize the change ahead. In addition to signs for the drivers to notice, they design a horizontal curve which will gradually slow traffic, along with the addition of drainage features. Once at the roundabout, traffic has slowed to about 30 MPH.  Drivers are required to yield to vehicles in the roundabout before entering it.

“We do geometric design changes to lower speeds even in rural areas. We bring those speeds down so that any crashes that do happen are low severity crashes,” said Haas. “They really are the only tool we have for at-grade intersections that effectively reduce or eliminate fatal and serious injury crashes.”

The new roundabout at Oregon 140 and Foothill Road will enhance safety and keep traffic moving. When open, it will be the sixth roundabout on an Oregon highway.

The roundabout will open to traffic once Jackson County’s new Foothill Road extension to Atlantic Avenue is complete. For traffic bound for Eagle Point and Oregon 140, it will be a safer, more efficient options.

The existing Kershaw Road intersection will be changed to eliminate the Oregon 140 crossing. It will be modified to right in, right out and left in.

Before the siting of other roundabouts in Oregon, a roundabout test course, or rodeo, is held.   It shows drivers they can maneuver well through the roundabouts. Trucks of all types test drive it.  Courses are laid out using cones and sandbags and allowances for off tracking onto the apron of the roundabout.

The idea is to show how the course is designed to accept all loads on the highway system, even oversized loads.

In March, 10 different vehicles converged at the Boise Cascade mill site in north Medford. The vehicles, ranging from a school bus to the largest trucks on the road, navigated a test course of the Oregon 140 roundabout.

A veteran truck driver, one of several who drove the March course, was impressed.

The $3.75 million roundabout project bids in the spring of 2020 with construction later that summer.

Jackson County and ODOT will host a drop-in open house on the projects on June 4 between 4 and 6:30 p.m. at the White City-Jackson County Library, 3143 Avenue C.

For more on the project visit:
www.oregon.gov/ODOT/Projects 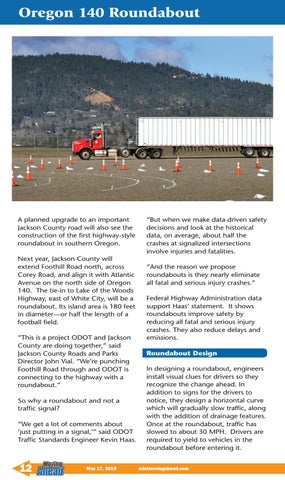