After years of research, Josephine County placed an order with Compete Coach Works for the purchase of two 35 foot, 100% electric-powered transit vehicles.  Last month, approximately 8 months later, those two vehicles arrived and are now being prepped for regular transit service.

This has been a long journey, much longer than anticipated.  The move to incorporate electric vehicles into service is pretty bold for a transit system the size of JCT.   With that said, it seemed like a natural transition since JCT was moving to more traditional heavy duty transit vehicles already.  With a useful life of 12 years the vehicles purchased today are going to be in service for a long time.  Both vehicles will be used to replace JCT buses that are well beyond their useful life.

The new buses seat 29 passengers and have an expected range of 180 miles.  Those daily miles add up to over 45,000 miles annually.  That is the equivalent of four private automobiles and more than 18 metric tons of carbon dioxide per transit vehicle.

The charging system for the vehicles is going to be inductive, or proximity.  That means the vehicle pulls over a charging pad when parked at the end of the day.  There is no need to plug-in, or unplug the vehicles and there aren’t individual charging units across the parking area.

These vehicles are more than double the cost of a diesel powered vehicle.  It is anticipated that the extra expense will be more than offset through reduced maintenance costs.  Additional savings are expected in reduced fuel costs.  Comparatively, diesel is more expensive per mile than electricity.   Many agencies running electric vehicles are seeing savings of $600 per month compared to diesel fuel costs.

Josephine County operates fixed and commuter route service across the entire Rogue Valley.  These vehicles will primarily be based in Grants Pass.  They will be deployed on the JCT commuter routes as well, which includes service to Medford.  Josephine County started commuter service between the two counties in 2014, with stops in Rogue River, Gold Hill and a connection to RVTD at its Front Street Station in downtown Medford.

JCT is eager to take this huge step and is one of only four agencies in Oregon deploying 100% electric vehicles into transit service. 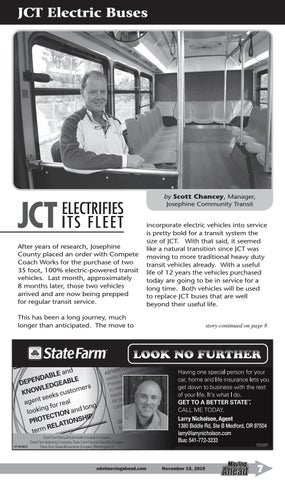