One of our regional highways has been in the news recently – and for all the wrong reasons.

U.S. 199, Redwood Highway, has seen its unfortunate share of crashes this past summer garnering the expected media attention. Behind the four fatal crashes along the highway in Oregon are the tragic personal stories of lives lost needlessly.

In general, Redwood Highway has about the same number of crashes per mile than other similar highways, such as Oregon 62 – Crater Lake Highway. The difference is Redwood Highway crashes are much more severe: they are usually head-on crashes where drivers cross the center line or run off the roadway into an oncoming vehicle or a fixed object, such as a tree.

From January through May this year, there were no fatal crashes along U.S. 199. Since the first of June, there have been four.  Five more fatalities have occurred on the Josephine County road system in the Illinois Valley.

So what’s causing these fatal crashes?

We and our law enforcement partners see a combination of poor driving practices, such as driving too fast for conditions, unsafe passing, following too close and driving either impaired or distracted. Also, drivers along the highway are driving much faster than the posted 55 mph speed limit.

Most of these crashes are occurring in daylight hours, all days of the week, under dry and clear conditions, with drivers of all ages along the entire corridor.  So it’s hard to pin down an exact cause or focus on a specific location within the corridor.

In recent years we have invested $33 million in the highway with new pavement, guardrail, center line rumble strips and site markers between Applegate River Bridge and Cave Junction.  We have more investments coming in our capital improvement plan, such as improving the so-called “clear zone,” opening up the sides of the highway to encroaching trees and brush. They hide warning signs, make it difficult to see around corners and act as fixed objects for vehicles to crash into.

We’ve also started a safety awareness working group that will meet frequently and act as local eyes and ears of what’s happening in the Illinois Valley. In addition to the local input and search for solutions from community members, other agency partners, and EMS agencies, the group also is represented by law enforcement – Oregon State Police, Josephine County Sheriff and Grants Pass Department of Public Safety.

We know they are doing everything they can to maintain patrols with short staffs and shrinking local budgets. For instance, Oregon State Police is covering all of Josephine County with a total of 10 troopers assigned to the Grants Pass field office. OSP and Josephine County Sheriff deputies would like to do more, but they just can’t given the limitations.

We talk in traffic safety about the four “E’s”: engineering, education, enforcement and emergency services. Currently, not all are working as they should; we have an imbalance and we want to fix that.  The safety awareness working group will help.

ODOT is committed to working with local and state partners to do what we can to help with the safety challenges along Redwood Highway. We’re committed to a corridor planning study to uncover possible long term safety improvements. Such a comprehensive effort is not expected until next year due to scope development. The local safety awareness working group will no doubt help inform that long range study, too.

We’ve embarked on a specific safety awareness campaign that includes portable and permanent message boards.  We have placed crashed car trailers along the corridor and at local high schools to raise awareness about the dangers of speeding and distracted driving.  We will continue that effort in the coming months as well.

We’ll continue to look for those quick turn projects to increase safety in the corridor. Safety is a team effort, and the most important player, as the data show, is the driving public. 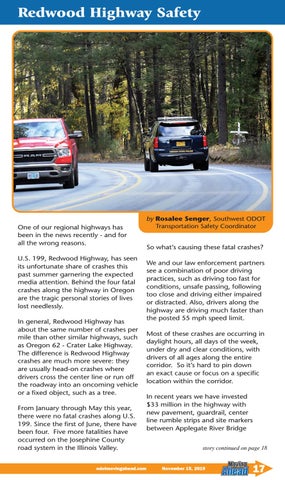