What’s the Deal with Real ID?

Something big is coming that will change the way you get on a commercial flight. Starting on Thursday, Oct. 1, 2020, you will need a special form of identification or face additional time and scrutiny by the Transportation Security Administration.

Don’t have the right ID?

What’s happening? It’s something called Real ID. The U.S. Congress passed the Real ID Act back in 2005. It came from the 9/11 Commission’s recommendation that the federal government “set standards for the issuance of sources of identification, such as driver licenses.” If a state driver license meets those requirements, the license is good to show at the TSA security line.

Before I go any further, please visit our website to find out more (oregon.gov/odot/dmw) And, spoiler alert, if you have a valid U.S. passport (or passport card), you can stop reading and use it instead of a driver license to board a plane.

Don’t have a passport? Don’t Panic

First, the back story. Why isn’t Oregon’s license compliant? The short version: DMV couldn’t legally work on a Real ID license until after the 2017 Legislative Session.

By the time the Oregon Legislature allowed an Oregon Real ID license, DMV was in the midst of a giant computer system replacement — a project that couldn’t be stopped to work on Real ID. The vehicle part of that upgrade debuted in January 2019. The driver part launches in July of 2020. A Real ID option will be part of that launch.

Oregon DMV will begin offering Real ID licenses on July 6, 2020. But do the math: we figure about a million Oregonians will want a Real ID license and there are only 64 workdays between July 6, and Oct. 1, 2020. DMV would have to issue nearly 2,000 licenses an hour to meet the demand. That’s not going to happen (no matter how hard we work)!

What happens if you don’t have a Real ID form of ID? TSA has something called: “Identification Verification Call Center.” Basically, you’ll have to prove your identity to an agent while at the airport. It takes time, and there are only so many agents on the line at one time. Don’t go there. It’s not a good option.

There is some good news here. A driver license isn’t the only form of accepted ID out there. A valid U.S. passport or passport card works just fine, as well as many military IDs. TSA has a complete list: https://www.tsa.gov/travel/security-screening/identification.

That’s our best suggestion — get a passport or passport card. A passport card is cheaper than a passport book ($30 vs. $145 if you already have a passport) and takes four to six weeks (and can be expedited for a fee). If you are applying for a new passport book or card, the documentation requirements are nearly the same as for a Real ID license:

There are over 75 passport acceptance facilities in Oregon — mostly post offices, county clerks, and universities. They are all aware of the Oregon dilemma and are prepared to serve you. But don’t wait. October 2020 will be here before you know it.

As for the Oregon Real ID driver license and ID card? Get ready for that now, if you want one. It is optional. If you aren’t going to fly domestically, go on a military base, or visit a nuclear facility, you don’t even need one. After things settle down with DMV’s new systems, you can certainly apply for one. You’ll need:

DMV has some great ways to help you figure out which documents to bring. Find out more at www.Oregon.gov/RealID. Gather your documents now so you’ll be ready. DMV is staffing up for Real ID because not everyone in Oregon will read this article (I know …). But really, do you want to wait in line at DMV when you don’t have to?

Bottom line: Get or use your passport book or a passport card to board a commercial flight as of Oct. 1, 2020.

Tom Fuller is communications manager for ODOT. Comments can be directed to ask.odot@odot.state.or.us 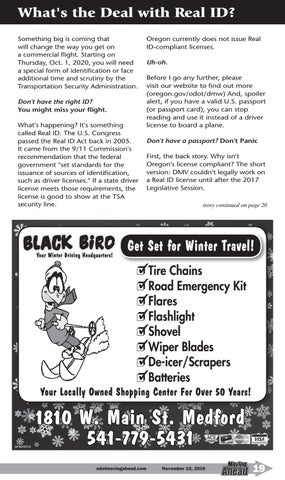