Our company is a family. Everyone brings something unique to the table, and at the end of the day – even on those days where we might have some disagreements – we have each other’s backs. That’s why the next sentence I’m going to say bothers me so much.

Someone is hurt in a work zone crash in Oregon every day, on average. First, that statistic is needlessly high. Second, I detest that phrase, “on average.” There should be nothing average about people getting hurt. It certainly doesn’t feel average that three of my co-workers have been killed in Oregon work zones since 2012.

Greg Priest, KC Wilson and Ron Davis died while working in a construction zone on Oregon’s highways. They were doing their jobs the right way when they were struck by a driver who was either inattentive or under the influence. Those tragedies devastated our close-knit company. We got on every safety taskforce and advisory committee we could. We advocated for our team. We lobbied for positive changes. And ODOT became a great safety partner.

That partnership became crucial on the biggest little job we had this year.

In early May, Knife River Materials completed a small maintenance project on I-5 in south Medford. Grind and inlay, 2 lane-miles, 1,600 tons of asphalt. A nice project we were very happy to have, but not one that would typically cross the desk of our board of directors. But this one did.

We bid the job with a lot of extra traffic control, and right after it was awarded, Project Manager Jon Barton submitted a request to ODOT to completely detour traffic from I-5. We had drawn up a plan. We figured with a full closure we could get the work done in two days instead of the prescribed four, and we knew our team would be safer. We called ODOT Rogue Valley Area Manager Art Anderson. We didn’t know what to expect.

Art went over the plan and supported it completely, as did ODOT District Manager Jerry Marmon. With those approvals, we were able to proceed with a full detour. It didn’t hurt that this stretch of I-5 – from Exits 24 to 27 – was ideally suited for it. The interchanges on both ends of the job were built to handle high volumes of traffic, and the interstate is paralleled by Oregon 99. So, starting at 10 p.m. both nights, we were able to fully divert traffic onto four-lane Highway 99 until 5:30 a.m. It all went smoothly.

With the two northbound lanes closed one night and two southbound lanes the next, we got to work. In addition to our paving crew and support personnel, we had a full-time mechanic on site to immediately respond to any breakdowns. We wanted to prove we could get the job done on time. We had our lowboy drivers ready in their trucks to load out our equipment the second we finished. We completed the job half an hour early – 14.5 hours instead of the 30 in the original plans. Safe for our team, safer for the public and a quicker turnaround.

We’re grateful to have a safety partner in ODOT, and we look forward to future projects where we can build in extra precautions like these.

ODOT is looking at detours for upcoming work on Oregon 140 west of White City and U.S. 199 west of Grants Pass. That’s fantastic. People aren’t statistics. Greg, KC and Ron had families. All of us do. By working together and truly putting safety first, we can get home to them every night.

Joe Soares is general manager of Knife River Materials in Medford. He has worked in the construction industry in Oregon for 32 years. Joe’s fourth grandchild, Keeney, was born on the second night of this I-5 paving project. 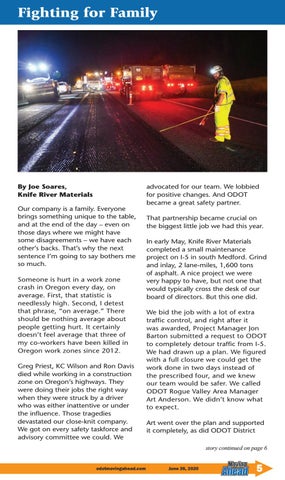