Construction is currently underway at several 6th and 7th Street intersections in Grants Pass, with work planned on several other intersections later this summer. The goal is to make them safer for pedestrians and to comply with current Americans with Disabilities Act requirements.

The first batch of intersection upgrades include signal and pedestrians improvements to the busy 6th and Morgan intersection as well as other crosswalk and ramp improvements to 6th and B Streets near the Josephine County Courthouse, 7th and School, and 6th and Steiger Streets.

So-called ‘bulb-outs’ or sidewalk extensions into the street will be constructed at 6th and B Streets and 6th and Steiger Streets. By allowing pedestrians to stay on the sidewalk but only a little farther out in the street, pedestrians and drivers will see each other better.

Why those intersections out of so many on 6th and 7th?

“These intersections have a history of crashes,” said ODOT Transportation Project Manager Dan Roberts. “We’re using federal safety funds specifically targeted to those type of intersections with a pedestrian crash history. The intersections are in the city of Grants Pass but operated by ODOT.”

The 6th and Morgan intersection at the northern gateway from Interstate 5 into Grants Pass will see the biggest change. New signals and sidewalk crossings and landings will replace those built when the interstate opened in the early 1960s. Back then, much of the surrounding 6th and Morgan area was undeveloped.

Although many local drivers who use the intersection may understand it, those from out of town are frequently confused and crash. As a result, the intersection has one of the highest crash rates in the state, said Roberts.

“Drivers come into the intersection with two signals with two separate phases, which is rare,” said Roberts.  He noted when adjacent traffic gets the green light and traffic next to them is still red, those waiting think they can go as well, resulting in a crash.

In addition to new signals and poles, the 6th and Morgan improvements include a blind or shield that will prevent the southbound off-ramp traffic seeing the traffic next to them on Scoville Road.

Due to traffic impacts, construction at the 6th and Morgan and 6th and B Streets will be at night.

“It’s a way that every design we encounter will be the same,” noted Ellis. “The work ODOT is doing at the local basis and statewide is giving people back their communities, back their freedom and independence.”

Later this summer, separate projects will upgrade the pedestrian ramps to current ADA standards at 6th and Midland and 7th and Steiger Streets. On Rogue River Highway, improvements are being planned between Maple and Hamilton Lanes.

To participate in an online open house through June 30 on the Grants Pass Signal and Pedestrian project, scan the QR code or follow the link: : https://openhouse.oregondot.org/signal-and-pedestrian-upgrades 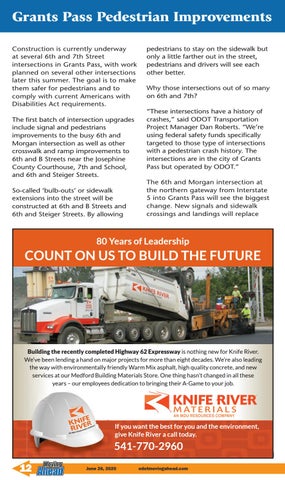