I-5 CA Border to Ashland Paving

When the calendar flipped to April 1 earlier this spring, contractor Carter and Company moved in to the second year of work on Interstate 5 south of Ashland.

Their initial intent was to begin rehabilitating the worn southbound lanes of I-5 higher up on the summit than the work they completed last year.

The difference this year is COVID-19. It’s changed plans for nearly everything in the country, including this project.

“Out of the gate, the contractor was concerned about getting this year’s first stage of work complete,” said ODOT Project Manager Chris Hunter.

To meet Carter’s timeline for the first stage, a subcontractor needed to come down from Washington. The uncertainty of that schedule forced project managers to flip this year’s stages: perform the bridge work first and work on the lane replacement last.

Late in April, with traffic moved into the southbound lanes, two tractors with pincher-like claws moved onto the closed northbound bridge at Exit 6. They quickly chewed through the damaged concrete and steel reinforced bridge deck.

Fine detail work needed to be done. While the entire bridge deck would be rebuilt, workers had to be careful not to damage the bridge’s horizontal supports.

“We needed about a week to demolish the deck before we could open the old highway to traffic again,” said Hunter. “We appreciate local residents’ patience for that week closure and for the short waits while Carter replaces the deck.”

The Exit 6 off-ramp is closed during this stage. The on-ramp has also been closed with the contractor looking for intermittent opportunities to open it for local traffic. Ramp work includes paving the shoulders, repairing the concrete interstate, replacing guardrail and moving power lines to accommodate a new electronic variable speed and message sign.

Bridge and ramp openings are set for late August.

If time allows this season, next comes interstate work similar to last year, only this year higher up the mountain. Between milepost 6.5 near the upper truck escape ramp south to milepost 9, traffic will be switched to the northbound lanes while the contractor repairs the southbound slow lane.

Like last year, rutted roadway surface will be repaired or replaced with new concrete. The goal is to have it wrapped up by mid-October in time for the winter travel season when the contractor’s equipment will be replaced by ODOT snow plows.

The 2021 season will see the final year of the project and the replacement of the southbound Exit 6 bridge deck.

“Next year, we’ll see the same impacts to the interstate, but the Exit 6 ramp accessibility will be better,” said Hunter.

Check out the Exit 6 bridge deck work. Part of the I-5: California Border to Ashland paving project on YouTube: 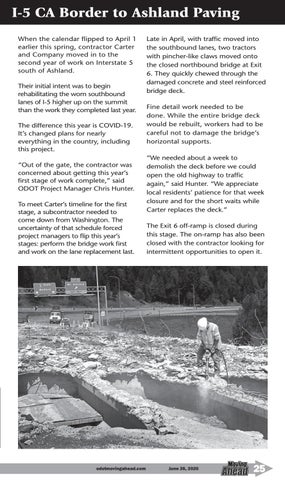