If you’ve driven Interstate 5 north to Roseburg recently, you probably passed through a large work zone on nearby Roberts Mountain, where the speed limit drops to 55 mph and concrete barrier flanks the narrow travel lanes.

As you climbed the mountain, weaving around slow-moving semis and log trucks, you may have also seen excavators digging into the slopes and trucks carrying rock from one side of the mountain to the other.

If you’re wondering what’s going on, you’re not alone.

Some have speculated ODOT is lowering the mountain pass by a couple hundred feet. Others wonder if new roads are being built for a future mountaintop development.

The real answer is less dramatic.

Trucks often slow down on steep uphill grades, causing congestion and delaying traffic. The differences in speed, which lead some drivers to abruptly change lanes, increase the risk of serious and fatal crashes on the mountain.

To help improve safety and the flow of traffic, ODOT is building a climbing lane on both the northbound and southbound approaches to Roberts Mountain pass.

In these three-lane areas, each a little over a mile long, trucks will be directed to the right lanes while passenger vehicles can use the other lanes to travel at normal highway speeds. This will ease congestion and improve safety by reducing the need for sudden lane changes.

“We’re addressing the need for more capacity especially when trucks are climbing a steep grade,” said Chris Hunter, ODOT area manager for Douglas County. “Slow moving trucks, especially when they take both lanes, create a safety hazard for everyone.”

The $30.5 million Roberts Mountain project will also pave about 5 miles of I-5 and install new guardrail and barrier.

Kerr Contractors of Woodburn spent most of last year excavating the hillside, and this summer and fall they will focus on building the climbing lanes. Paving is scheduled for next spring, and all work is scheduled to be completed by June 2021.

Some construction is hard to see from the road, such as building retaining walls. Other work has gotten a lot more attention.

To widen the roadway for the new southbound climbing lane, Kerr is using oversize dump trucks and road graders on the north face of the mountain and near the pass. Material from those groomed slopes is being transported to the valley south of the mountain.

“It’s nice to have a close location to place the fill,” said Hunter. “To place this amount of fill off-site miles away would be very expensive and a logistical headache.”

About 500,000 cubic yards of material has been transported from the north slope to the south valley. Since each truck carries about 30 cubic yards, that means more than 16,500 loads have been hauled over the top of the mountain.

Climbing lanes are a popular and important addition to freeways in southern Oregon, home of some of the steepest grades on the interstate system.

Over the past decade, I-5 climbing lanes have been constructed on Mount Sexton, Sutherlin Hill, Rice Hill and near the Drain interchange.

Mike Card, president of Combined Transport based in Central Point, believes climbing lanes have many benefits.

“Trucks are a lot slower going up mountain passes,” Card told Moving Ahead back in 2016. “When you have only two lanes and cars and other trucks are trying to pass, you have congestion. Safety is critical.”

Card noted the trucking industry is based on just-in-time delivery, and any delay is harmful.

“The ability to pass other trucks in a safe environment helps us stay on schedule,” he said.

Card believes improvements are needed on all steep passes, and southern Oregonians aren’t the only ones who will benefit.

“Congestion is an issue for everyone in Portland, and a truck climbing lane is a need for everyone traveling through southern Oregon.” 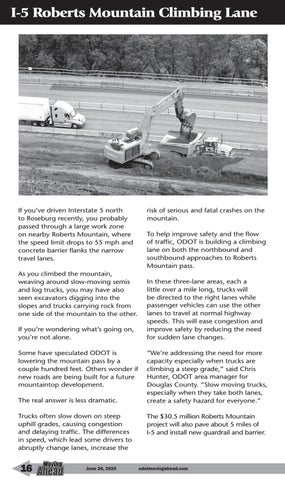