Interstate 5 daytime drivers between Medford and Grants Pass are missing a significant bridge project during the late night hours.

Beginning about 8 p.m. until early morning, traffic is moved into a single lane to make room for a cadre of construction workers. They begin the night’s hand work of removing and repairing sections of concrete decking on the four I-5 Twin Bridges near Valley of the Rogue State Park.“These four bridges – two in each direction – are past due for repair,” said ODOT Bridge Engineer Bob Grubbs. Each side may take up to six weeks to complete. They were last repaired in the 1980s.

During the night time work, crews are cutting sections of poor concrete, sometimes by jackhammer, and replace with new fast-setting concrete. Once those area are fixed on the bridge, the deck will get a new overlay of fast-setting protectant, similar to what was placed last year on the Caveman Bridge in Grants Pass.

“It has to be dry, and the material is sensitive to temperature,” said Grubbs. “Not too hot and not too cold.”

The work is similar to the recently completed deck repairs to the I-5 Medford Viaduct. Like that project, there’s a significant element of risk to the workers since traffic is mere inches away with nothing between them and traffic than a painted solid skip stripe.

That’s the case on this project as well, even though the contractor, Truesdell Corporation of Tempe, Arizona, had the option to detour traffic each night onto nearby Rogue River Highway to do the deck repairs.

Full detours will still be needed over several nights so the final protective coating is added to the bridge deck.

Since these bridges are narrower than the viaduct, ODOT looked at various ways to keep workers safe, repair the bridges and not impose  traffic restrictions.

Building so-called traffic “crossovers” was considered in development of the project. But that would have added to the project timeline as well as another half-million dollars to the budget and conflicted with adjacent Valley of the Rogue State Park.

“We appreciate everyone’s patience as we do this work – one direction at a time,” said ODOT Project Manager Tim Fletcher. 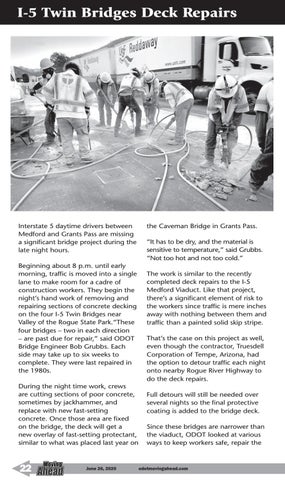