Two separate road projects – the Oregon 140 roundabout and Foothill Road extension – will unite to become one for drivers east of White City later this fall. Already the marriage of ODOT and Jackson County projects can be seen from the air and the ground, and soon they will translate into a new, safer Oregon 140 intersection.

So why a roundabout and not a traffic signal on this high speed, rural highway?

“We get a lot of comments about ‘just put in a signal,’” said ODOT Traffic Standards Engineer Kevin Haas.

“But when we make data-driven safety decisions and look at the historical data, on average, about half the crashes at signalized intersections involve injuries and fatalities. And the reason we propose roundabouts is they nearly eliminate all fatal and serious injury crashes.”

Many of us in southern Oregon use the roundabout at Siskiyou and Highland as our reference point. However, the Oregon 140 roundabout will be about 200 feet across compared to the smaller urban roundabout in south Medford.

Engineers design visual cues into the roundabout. That includes building in a curve to slow traffic along with signs and drainage features. For drivers entering a roundabout, their vehicles have slowed to about 30 mph. Drivers then must yield to vehicles in the roundabout before entering it.

“We do geometric design changes to lower speeds even in rural areas. We bring those speeds down so that any crashes that do happen are low severity crashes,” said Haas. “Roundabouts really are the only tool we have for at-grade intersections that effectively reduce or eliminate fatal and serious injury crashes.”

Jackson County’s extension of Foothill Road is one of several updates planned by the county and the city of Medford. When completed later this fall, the Foothill Road extension and roundabout will create a continuous route traversing the east side of the Rogue Valley between Phoenix and White City. Under the Jackson County’s transportation plan, the Foothill to Atlantic Avenue route will connect to East Dutton Road and Oregon 62 north of White City.

Upon opening later this October, the Oregon 140 roundabout will be the sixth roundabout to open on a state highway in Oregon. The others are in Astoria, Forest Grove (2), Sisters and Prineville. Two more are in the works on U.S. 20 between Sisters and Bend.

“No matter where you travel, you’ll pass through a roundabout,” said ODOT District Manager Jerry Marmon. “Both California and Washington states are using them as a way to safely move traffic through rural intersections.”

Check out how to drive the Oregon 140 roundabout: 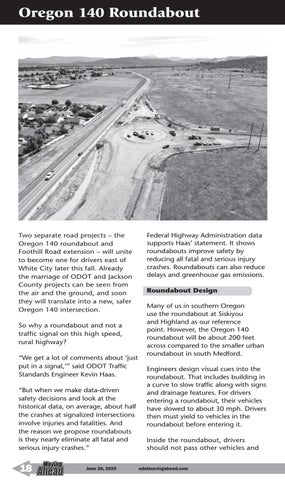