Changes are coming later this winter to Oregon 99 north of Phoenix in advance of a culvert replacement project over Coleman Creek. Utilities will be moved near the culvert to prepare for the 2022 project that will replace the aged culvert with a new bridge.

The old box culvert has a severe drop that not only causes erosion downstream but hinders small fish from migrating to spawning beds higher up in the water shed.

Changing it to a bridge is on the Oregon Department of Fish and Wildlife’s priority list, according to Rogue District Fish Biologist Dan Van Dyke.

“Coleman Creek is one of the larger tributaries of Bear Creek,” said Van Dyke. “Cutthroat trout are native to Coleman Creek, but the dominant fish species is summer steelhead.”

Van Dyke notes each spring, wild summer steelhead produced in Coleman Creek migrate down Bear Creek to the Rogue River and out to the ocean at Gold Beach. The migration is repeated about every two years when the fish return as 3 to 5 pound adults coming back to span.

ODFW estimates Coleman Creek provides more than four miles of habitat, but it is less than a half mile upstream from Bear Creek. While not the only human-made barrier to fish migration and production, the culvert is the lowermost barrier and as such is the place to begin restoration.

The culvert replacement project is part of the stewardship agreement between ODOT and ODFW.

“We work cooperatively with our partner agency to help reduce the number of barriers to fish passage on our highways,” said ODOT District Manager Jerry Marmon. He added the agency has done this on several other projects, most recently on Kane Creek near Gold Hill.

ODFW urges all landowners along Coleman Creek and nearby streams to protect and restore native trees and shrubs along streambanks. Doing so keeps streams cool and clean.

A fund strictly dedicated for fish passage is paying for the bridge conversion.

For traffic, culvert replacement will mean single lane traffic through the short work zone while an ODOT contractor builds the new bridge, one-half at a time. Access to nearby business driveways will be available during the different project phases.

Needed pedestrian and bicycle lanes are also part of the project. Lack of sidewalk and bike lanes are a major impediment for people living north of Coleman Creek on Oregon 99 who want to safely walk or bike to the nearby Phoenix stores.

This project will help set the stage for future multimodal transportation upgrades to the north.

ODFW video of juvenile steelhead trying to migrate past Coleman Creek culvert can be viewed at:  https://bit.ly/2yAQC1h 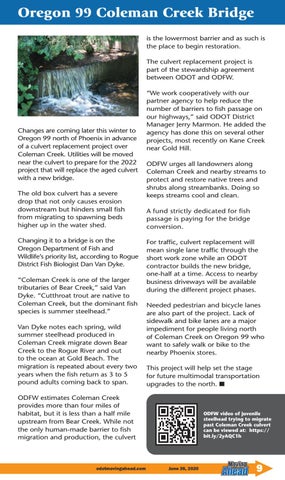