Oregon 99 between Phoenix and south Medford is a busy highway that is home to many apartments and manufactured homes. It’s also a very dangerous four-lane corridor with few streetlights, sidewalks and crosswalks.

In the past, this corridor has seen more than its share of serious injury and fatal crashes by people either walking on the roadway or crossing it on a run to the store.

Without a budgeted long-term project to address the corridor safety problems, District Manager Jerry Marmon called a technical team together to see what could be done to make this densely populated and troublesome corridor safer.

Solutions that came out of the meeting are designed to make the corridor safer and better lit for all users, pedestrians and drivers. And the scope of the project is designed to be delivered quickly and as efficiently as possible as compared to other more complicated projects that take years of planning, engineering and purchasing right of way before the first shovel is turned.

The idea is to use operations dollars for a project that can quickly be designed in-house and then sent to a contractor, with much of the work done by state forces.

“The dollars spent on this project will really help make this corridor safer until we can get a larger capital project that will build sidewalks, crosswalks and bike lanes,” said Marmon. 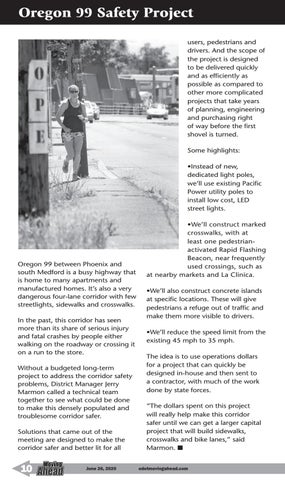