A crash-prone section of U.S. 199 between Selma and Cave Junction is now a designated safety corridor.

The safety corridor has been in force since May 1 for a seven-mile area of Redwood Highway.

Safety corridors are designed to raise public awareness. Drivers will see an increase in law enforcement patrols and traffic fines will double.  As an added safety measure, drivers are encouraged to use their headlights at all times.

“This section of Redwood Highway has a higher crash rate than other rural highways,” said ODOT Transportation Safety Coordinator Rosalee Senger. “We’ve been working with a local safety awareness committee for more than a year on safety education and enforcement, so to see this go into effect is a win for the Illinois Valley community.”

Last year there were four fatal crashes on Redwood Highway all between June 1 and August 30.

The goal of the safety corridor, which will run through May 2023, is to encourage people to drive carefully and avoid common driving errors.

“We want everyone to make it to their destination without incident and this safety corridor will help in that effort,” said Oregon State Police Lieutenant Stephanie Bigman.

She said OSP is looking out for the “Fatal Five”:

Later this year, ODOT plans to start a corridor planning study which will involve the community. It will suggest long term safety-related improvements and future projects. 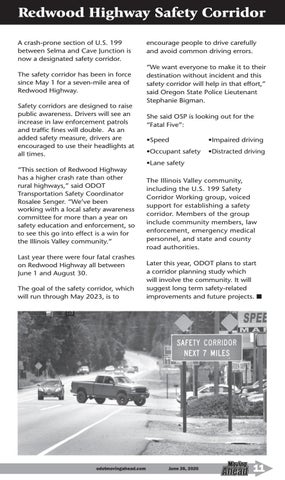