After Almeda: the recovery

After the Almeda Fire ripped through north Ashland, Talent and Phoenix, the damage was so extensive, it took days to safely allow people inside the fire zone. The hazards were many, including downed trees, utility poles and lines all across Oregon 99 and the local streets.

Besides the debris recovery of nearly 3,000 homes, contractors came in to assist state crews with tree felling and guard rail repair. About 800 trees were severely burned or became hazards along I-5 and Oregon 99. More than a mile of guardrail burned in the fire, as well 4 – 5 miles of highway fencing and nearly 100 stop signs and other state highway regulatory and advisory signs.

The Bear Creek Greenway has been reseeded with 20 tons of native seed mix to prevent erosion and keep fire debris locked in place. Erosion control features have been built or placed along the burn scar to keep debris out of Bear Creek itself.

Nearly all of ODOT’s $3 million emergency and recovery work will be compensated by Federal Highway Administration.

Recovery efforts will continue through the fall and winter and the rebuilding phase is just beginning.

ODOT has been tasked statewide with overseeing the so-called Step 2 clean-up of burned properties. Contractors will be hired to remove the debris from burned properties. This is an important next step toward recovery of the areas of our state affected by the wildfires. 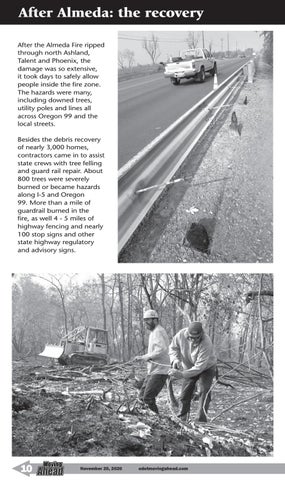