I-5: CA Border to Ashland Paving

After COVID-19 affected construction season, major Interstate 5 improvements south of Ashland are complete until next April.

All lanes and ramps reopened on October 15 to make way for the winter season over Siskiyou Summit.

Next spring, contractor Carter and Company will be back for what could be the last construction season working on the interstate, with the focus again on the concrete roadway and the Exit 6 southbound bridge.

“We get it. This year’s work on the northbound I-5 bridge had an impact on the lives of those who use the Mt. Ashland exit to get to and from their homes,” said ODOT Project Manager Chris Hunter. “Along with COVID and everything else the year has thrown at us all, we appreciate their patience for the last seven months. Next year won’t be near as bad – at least with the interstate work.”

In 2021, the concrete roadway and rebar of the Exit 6 southbound bridge will be demolished and dropped onto Old Siskiyou Highway below. Like last year, that will mean about a one-week closure to drop it and clean up the area underneath the bridge. Unlike last year, the connecting ramps will remain open during the demolition and after. However, the southbound on-ramp will take on a different look.

Rutted concrete roadway surfaces will be repaired or replaced with new concrete. New shoulder paving and striping is also planned.

New variable message and speed advisory signs have been folded into this contract. Hunter said that will allow for cost savings and reduced delays on the interstate.

“These new electronic signs will not only allow us to advise drivers of traffic incidents on the Siskiyous but will also advise them of the changing speed limit due to weather conditions,” said ODOT Interim District Manager Jeremiah Griffin. 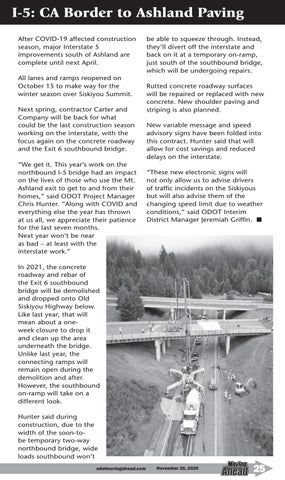