Another 2021 improvement project on Highway 140 will begin next summer. This project is between the Bear Creek Bridge east to 5th Avenue in White City.

The estimated $7.3 million project will replace the aged and cracking pavement with a new asphalt surface. Like Blackwell Road just to the west, the former county road is in need of a facelift along with new striping and signs and recessed reflective pavement markers.

“This is a horrible roadway in the fog and darkness of winter,” said Jeremiah Griffin, Interim ODOT District Manager.

The 5 miles of improvements will make the highway safer for the growing number of vehicles that use it as a connection to I-5 from White City and Eagle Point. It’s also a heavily used freight route between Klamath Falls, White City and Interstate 5. Like the previous section to the west, there’s a large number of aggregate trucks that use the route.

Due to the amount of daytime traffic on the roadway, most of the pavement work will be done at night. However, extensive work on the narrow, 1954-era bridge will need to be done under a full closure.

Several full weekend closures are planned between High Banks Road and Antelope Road to allow the contractor enough time to work on the narrow Whetstone Creek Bridge. That work will entail removing and replacing the bridge rail and all the asphalt on the bridge, including several hundred feet leading up to the bridge. In addition, a new waterproof sealant will be applied to the bridge before all the pavement can be brought back to the highway grade.

Detours during the full weekend closures will be signed, and local traffic and the few residents living in the project area will be allowed access to their homes. 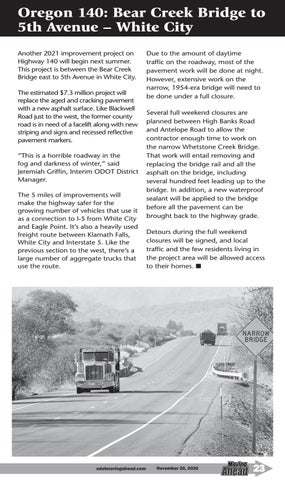