Oregon 140: I-5 to Blackwell Improvements

Most of the time it’s a struggle to access the facility on the narrow two-lane road because of the traffic, especially a high number of rock, concrete and asphalt trucks.

With a road improvement project planned for next summer to straighten and widen the highway, Card knows his drivers will breathe easier.

Next spring and summer, an ODOT contractor will work on a nearly $10 million project to widen and straighten the narrow one time original route of U.S. 99. The new roadway will feature a wider two-lane highway with a center turn lane. The roadway will also feature bike lanes, center line and shoulder rumble strips, along with high visibility striping and signs.

“This road is a critical connection from the freeway to White City, Shady Cove and points east. It’s way too narrow and curvy. Along with the very narrow shoulders, it’s all very difficult for our trucks with little room for error,” Card said.

ODOT acquired this section of Blackwell Road as well as Kirtland Road several years ago from Jackson County. As part of the trade, ODOT transferred ownership of several I-5 frontage roads, Avenue G in White City and the Jackson County portion of Tiller-Trail Highway.

It made sense to acquire Blackwell and Kirtland Roads from the county, according to ODOT Interim District Manager Jeremiah Griffin.

“This highway, now designated as Oregon 140, truly acts as a state highway and not a ‘farm to market’ road typically associated with a county road. There’s commuter traffic but there’s obviously a high number of interstate trucks as well as aggregate trucks that use the highway,” said Griffin.

This area has nearly all of the aggregate resources in the Rogue Valley and is home to Knife River Materials, as well as other sand and gravel operations.

“A wider and straighter roadway will drastically improve safety for the traveling public, local businesses, and our business and customers as well,” said Joe Soares, general manager of Knife River Material’s operations in the Medford area.

As funding becomes available, improvements will continue. Utility relocations are planned for next spring prior to the improvement project.

Once underway, it’s anticipated construction will be under traffic with flaggers. Some night and weekend work is also planned.

This project may be underway at the same time as the nearby paving/bridge work on Oregon 140 between the Bear Creek Bridge and 5th Avenue in White City. 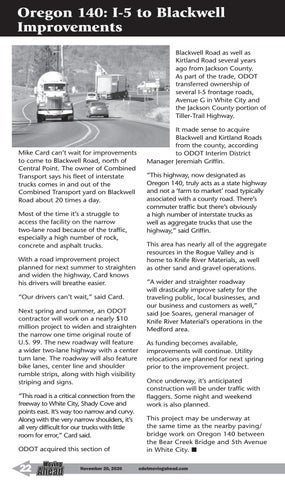