Experts say there’s a one in three chance we’ll see a Cascadia earthquake in the next 50 years. When it “unzips,” we can expect 3-5 minutes of shaking and long term impacts to the region, including injury and deaths.

When the shaking stops, much of the region will be isolated by damaged or destroyed bridges. Landslides may also block major routes into and out of the Rogue Valley. And that’s just the roadway features. Dittmer said everyday items we take for granted such as power, water and gas lines will be out.

While ODOT has a strategic plan to rebuild and reconnect the state region-by-region, the idea behind the Southern Oregon Seismic Resiliency project, passed by the 2017 Oregon Legislature, is to armor key southern Oregon bridges and hillside slopes before the Big One at a cost of about about $45 million.

“The idea is to prepare now so the area can get back on its feet as quickly as possible, to get the region reconnected to the outside world,” said ODOT Project Manager Chris Hunter. “How can we act strategically now to improve key bridges and known problem slopes to keep critical, life-saving goods flowing into and out of the region?“

ODOT crews prioritized or evaluated the most vulnerable bridges and slopes to keep the Rogue Valley connected along the I-5 corridor to Eugene and the Willamette Valley, and from the Rogue Valley east to the U.S. 97 corridor over Oregon 140.

The plan is to quickly clear some kind of roadway connection – in the days and weeks after a subduction zone quake – even if it’s a single lane or two. By keeping that connection, critical supplies can get into and out of the area.

The first armoring of bridges just wrapped up near Sunny Valley and will soon come to several I-5 bridges in the Grants Pass area.  The idea is to strengthen these 60 year-old bridges so they won’t tip over or lose their horizontal girders during an earthquake.

Dittmer said September’s wildfires showed we’re not prepared for a major disaster but that ODOT’s projects are a good, first step.  He hopes Rogue Valley residents also take note by having a “Go Bag” ready and accessible and a plan for what to do next. 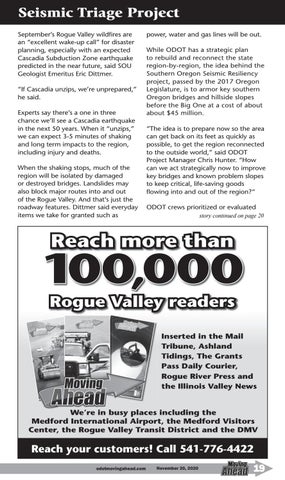