Nothing says winter is back better than the clanging steel of tire chains being muscled onto ODOT’s equipment at the Ashland and Siskiyou Summit maintenance yards.

“It’s definitely a heavy lift, depending on the rig,” said ODOT Ashland Maintenance Manager Bob Harshman. Chains can weigh several hundred pounds, especially for the graders and loaders used to fill cinder in the 10 yard plow and sander combinations.

“But we’ll be ready to go when the snow falls,” he said.

The southern Oregon ODOT team – covering from the California Border to Diamond Lake – is ready to go this winter with sheds full of cinder for traction and storage tanks of liquid deicer, and the equipment to apply it. Along the I-5 corridor, they can even tap into salt when necessary to keep traffic moving when the alternative is to stop all traffic and make nearly everyone to chain up.

“The old adage of the snow zone manager is ‘we’re ready, but are you (the public) ready’ for what Mother Nature will throw our way?” said Interim District Manager Jeremiah Griffin.

2020 has been an unusual year. COVID-19 restrictions reduced traffic numbers in the spring, then September’s wildfires closed Interstate 5 several times along with several other Oregon Cascade mountain highways.

“We know everyone has been through a lot,” said Griffin. “But the constant from one year to the next is, if you travel in or out of the Rogue Valley, you will drive over a high mountain pass. We want you to be ready.”

A lot of attention is focused on Interstate 5 in the Siskiyous. At 4,130 feet, Siskiyou Summit is the highest point on I-5 between Canada and Mexico, not to mention the three I-5 passes north of Grants Pass that also get snow that snarls traffic.

ODOT focuses most of its resources on the Interstate 5 corridor due to the amount of freight and number of vehicles on the West Coast corridor. The goal during storms is to get the roadway to bare pavement as quickly as possible. But that doesn’t mean people can skip being prepared for winter travel.

“Please stay on state highways especially through mountain passes. If I-5 is closed due to snow, don’t follow your GPS onto a snowy, non-maintained county or forest road. You’ll get stuck and stranded,” said Griffin.

Cascade mountain highways between the Rogue Valley and Klamath Falls, Diamond Lake and Bend are higher in elevation and managed at a different level. Plowing to remove snow and putting down cinder for traction are the main tools.

“The expectation is that we’ll have snow pack on these highways,” said Griffin. “And for the most part, drivers know and expect that.”

That means drivers should be especially prepared to slow down, and carry chains and know how to install them and have all the necessary items to safely make it to their destinations.

Unlike past decades, the amount of information available to winter drivers today is amazing, said Griffin.

Electronic message signs, personal Smart Phones, Tripcheck, QuickMap in California, Waze, and Twitter all are helpful in keeping motorists “in the know” about the changing conditions before and during their trip. 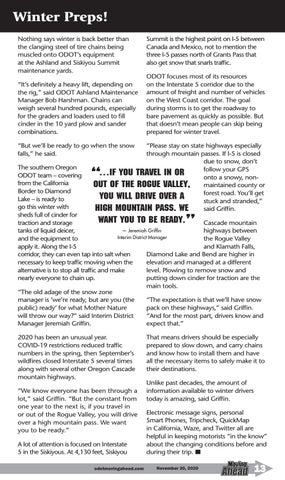